The Paintco Strykers began their co-ed league campaign with a scoreless draw against IT&E/IP&E, but managed to earn their first win in Week 2 with a 3-2 edge of the Rovers FC. The Strkyers’ Julio Gonzales opened scoring both teams, notching a goal in the 11th minute. Teammate Kim Sherman doubled the advantage with a goal in the 22nd minute, earning the first goal by a female player in the league. Just a minute later, the Rovers’ Carlos Barajas put one in for his team for the eventual 2-1 halftime score.

[The Paintco Strykers’ Susumu Morimoto passes the ball backwards to a teammate as he is met by the Rovers FC’s Cara Canto and Eladio Manansala in a Week 2 game of the Bud Light Masters Co-Ed Soccer League at the Guam Football Association National Training Center. The Strykers edged the Rovers 3-2.]

The Strykers’ Kyung Shipman scored the eventual game winner one minute into the second half to give her team a 3-1 advantage. About 10 minutes later, a goal from the Rovers’ Craig Wade reduced his team’s deficit to just one, but tight defending from both teams prevented any more goals for the night. The Rovers had chances to level the game, including one instance in the final minutes of the match. The Rovers’ Pedro Walls headed the ball to teammate Take Inoue over Strykers defenders near the goal, but Inoue’s low scissor kick attempt for the finish was denied.

With the win, the Strykers currently are at the top of the Masters Co-Ed League leaderboard with four points. Right behind the Strykers is Big Blue with three points after the team’s 4-0 win over Hyundai FC. 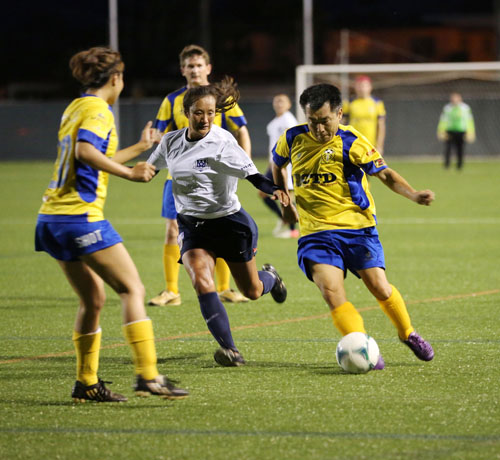 [The Rovers FC’s James Oh looks to pass the ball as the Paintco Strykers’ Kyung Shipman closes in on him on defense in a Week 2 game of the Bud Light Masters Co-Ed Soccer League at the Guam Football Association National Training Center. The Strykers edged the Rovers 3-2.]

Big Blue’s Pepito Bedia, Jr. scored the first goal for his team, kicking the ball from waist-level towards the left post of the goal. Later, teammate Shawn Gumataotao found himself in a one-on-one with Hyundai’s keeper and slotted in his shot to double the score. Before the end of the first half, Big Blue’s Aubrey Benito made her run up the right flank toward the goal, avoiding a slide tackle from a Hyundai defender and eventually finding space to shoot to give her team a 3-0 advantage. 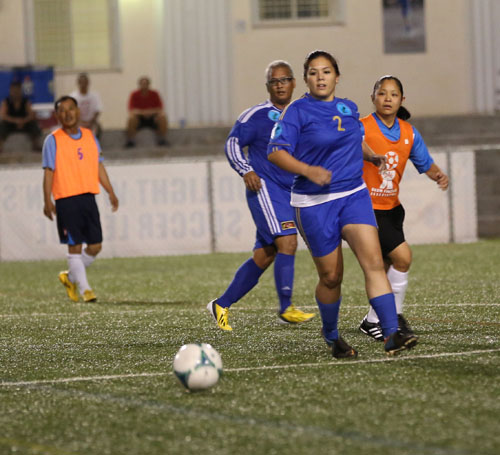 Bedia later scored his second goal of the game in the second half for the final 4-0 score.

Hyundai FC played only 9 players throughout the match with the team’s two female players playing the full 90 minutes, as league rules stipulate that a minimum of three female players must be on the pitch at all times. The number of men playing also is reduced if not enough women are available to play.

The Bud Light Masters Co-Ed Soccer League continues Saturday with Hyundai taking on the Strykers at 6 p.m., followed by IT&E/IP&E facing the Rovers in the 8 p.m. match.