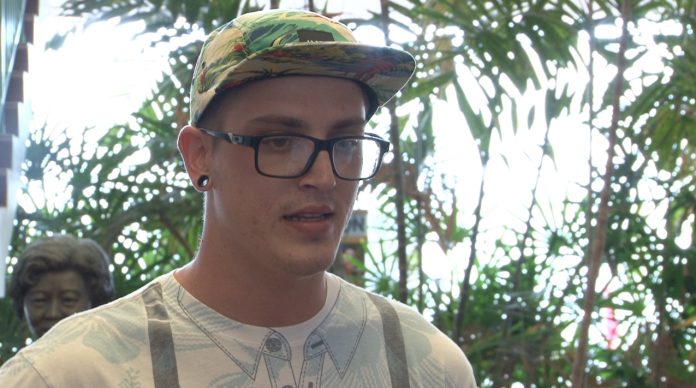 “You’re not going anywhere kid,” debuts at the university of Guam film festival, in the UOG lecture hall.

Guam – The University of Guam Film festival will begin on Friday and it will feature Kyle Twardowski and his feature length film shot exclusively on an iPhone.

Coming off success at the Guam international film festival last year, Kyle Twardowski is debuting his first feature length film titled, “you’re not going anywhere…. Kid. The film, shot with Twardowski’s iPhone 6, tells the story of three friends who find themselves in a potentially dangerous situation when they stumble across a briefcase and the hit man tasked to recover it. Twardowski tells PNC that the film was shot with virtually no budget, but he did receive help from community members. Twardowski says local company Hagatna eye wear donated items to the film as well as the bearded villains, Guam chapter, who donated five actors. Twardowski’s short film “mob” finished top five last year and made it all the way to the Guam international film festival. Keeping true to Guam culture, Twardowski says one of the things that drives him to make films is his family.

“What inspired me to make the film, like honestly, my family drives me..my wife, who also has a short film titled ‘oh mother dearest,’ it’s gonna be in the experimental shorts and i helped her shoot it but she was the main idea haver and the main writer of the film. And that’s what inspires me, we can do it as a collective. She wrote ‘mob’. Its something that really brings us together and it’s something she stands behind me…we have a dream together,” said Twardowski.

“You’re not going anywhere kid,” debuts at the university of Guam film festival, in the UOG lecture hall. The first screening is at 8:20 p.m. on Friday April 29 and additional screening will be held at 8:05 p.m. on Saturday