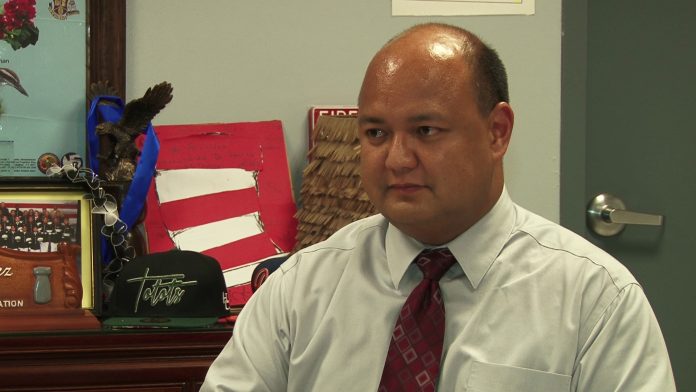 However, GDOE Superintendent Jon Fernandez says the claims have no merit and he’s already filed his own criminal complaint for extortion.

Guam – Guam Department of Education Superintendent Jon Fernandez is facing allegations of sexual harassment from a student of JP Torres Alternative School. But Fernandez says the claims have no merit and he’s filed his own complaint with authorities for extortion.

The alleged sexual harassment happened sometime in January this year. The student, who turned 18 at the start of the 2015 – 2016 school year, met with PNC to provide her statement but did not want her identity revealed. The student says she and Superintendent Jon Fernandez have been communicating through text message and whatsapp since the start of the school year.

At one point, the student says she had asked Fernandez via whatsapp if he had an extra phone she could purchase from him. The student claims Fernandez responded by saying that he had an extra cell phone he could give to her for free. She says Fernandez then told her he would give it to her “but you have to be a good girl.” The student also says that the message was accompanied by a blushing emoji, which she says in her complaint means that the person wants something but is too ashamed to ask for it.

In written statements to the police and the Guam Education Board, which PNC obtained, the student says she interpreted Fernandez’s message to mean that he would only give the cell phone to her if she had sex with him.

Furthermore, the student says that in March during Chamorro month activities, Fernandez visited her school alone and touched her inappropriately on her buttocks as he hugged her. A substitute teacher, Marcia Palomo, says she witnessed this.

The student, Palomo and JP Torres Principal Eleuterio Mesa brought their complaints to the GEB in May, but according to them, the board refused to hear from them. Although some meetings were held with the board in executive session for mediation purposes, they still took their complaint to the police.

Several statements were provided, including screen shots of text messages between the student and GEB Chairwoman Lourdes San Nicolas. However, what was not provided was the actual text message Fernandez allegedly sent to the student back in January.

The student filed a complaint for sexual harassment, sexual solicitation and official misconduct.

However, Fernandez says the student, Palomo’s and Mesa’s claims have no merit and he’s filed his own criminal complaint with the Guam Police Department and the FBI for extortion. His statement to police is on official GDOE letterhead and signed by six of the nine board members.

Fernandez and the board believe that this entire case was first presented in the context of a settlement complaint by Mesa, who has an outstanding Civil Service Commission judgment against GDOE. Fernandez points out in his complaint that Mesa won a $300,000 judgment but refused to accept payment from GDOE because taxes were being withheld. Palomo and the student, he says, are also demanding other favors from GDOE in exchange for dropping the sexual harassment complaint.

Fernandez also points out that the alleged inappropriate touching was not filed as part of the the initial complaint and was only added as an amendment to their complaint at a later time.