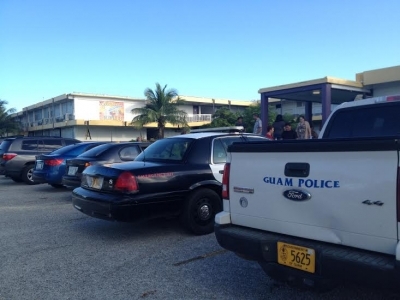 GDOE implemented a new system that involves keeping kids in their classroom for low-level bomb threats while the school is being swept for bombs by school staff.

Just today, (Thurs.) the Guam Department of Education received 14 bomb threats. That makes the total bomb threat count for this month at 38.

GDOE Acting Deputy Superintendent Chris Anderson says, “Well unfortunately we have a total 14 bomb threats that we received today. Majority of the threats were rated as low threats by the school using the new Risk Assessment Matrix so again we’re optimistic that the new tool that the schools are using are going to greatly help them better assess the level of risk they’re facing with these bomb threats that we’ve been facing.”
The reported bomb threats were at Marcial Sablan Elementary, George Washington High, Inarajan Middle School twice, Benavente Middle School twice, Agueda Johnston Middle, Liguan Elementary, Simon Sanchez High, Oceanview, Southern High, FBLG Middle, and Okkodo High.
Anderson says although some of the bomb threats were automated messages, most of the bomb threats they’ve been receiving, they believe, are internal. He says, “We have had robo calls that have gone through several schools like IMS, JFK, and Okkodo. We’re not sure about the Twitter Account taking responsibility, that’s external. All the other threats we’re pretty confident that these were internal, students who were trying to get out of something and decided to write a note or scribble on the wall.”
With the trend of bomb scares at the schools, that new Risk Assessment Matrix was developed by GDOE in collaboration with the Guam Police Department, Guam Fire Department and the Homeland Security-Marianas Regional Fusion Center. Basically, Anderson explains, schools follow the Incident Command System. Schools would determine the level of threat by several factors including: the level of security at the school and the level of preparedness of school personnel. Based on those factors, schools come up with a score to determine their overall level of risk.
Anderson says all of the bomb threats today were considered low level. “Because it’s deemed to be a low threat the school takes the responsibility to go through and sweep the campus and ensures there’s no threat or risk to anybody, looks for suspicious devices or anything out of the ordinary. Once they sweep the campus, they give themselves the clearance to proceed with normal operations.”
But what happens if there is a true terroristic threat and students are not evacuated? Anderson answers, “If there was a true terroristic threat to our campuses, we will completely engage public safety officials and have them take over the situation. We’re maintaining Incident Command if it’s a low-medium threat, if it’s a high risk for our schools, we would have public safety take over.”
Anderson says with the multiple occurrences of bomb threats at the various schools, students will have to make up those instructional times lost. “If students and parents are thinking that we’re not going to have to make up this time, that’s incorrect. The Superintendent wants everyone to know that every option is on the table, and if we need to make up days to make sure there are 180 instructional days, even if means extending school days, increasing minutes in a school day, he’s open to consider that,” he says.
GPD is reminding the community that any information about the recent bomb threats can be provided to Guam CrimeStoppers at 477-HELP (4357). GPD Officer Paul Tapao said if you call and the information you provide leads to an arrest, you could get a cash reward up to $1,000.