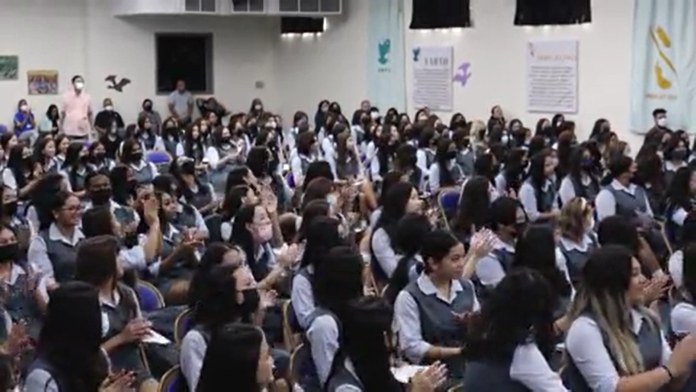 School is back in session!

Today marks the first day of Cougars returning to the Academy of Our Lady of Guam.

As the first day of school rolled in, the students at Academy of Our Lady of Guam were welcomed with their traditional “Mass of the Holy Spirit” followed by an Assembly spearheaded by the faculty staff and the student council.

During the assembly, students were introduced to the new school president, Rita Duenas, along with teachers, followed by the keynote speaker and academy alumni, U.S. Ambassador to the Republic of Albania, Ambassador Yuri Kim, and other faculty members.

Ambassador Kim established the Jane Wha-Young Kim Scholarship at the Academy in 2007 in memory of her late mother, who was a casualty of the Korean Airline Flight 801 on August 6, 1997 crash in Guam.

In addition, this is the first time since the pandemic, that all Academy students will be scheduled to have lunch in the cafeteria at the same time.

President Duenas said, “Well changes definitely, the lifting of the restrictions, I know they’ll feel a little bit more comfortable, we just want to reassure everybody that, we make safety our priority, we still make a lot of the safety things available for the kids, like hand sanitizers, masks if they should need it, also the kids get to eat all together in the cafeteria, something they weren’t able to do for the last couple of years.”

Along with sanitizing stations, the Academy of Guam has provided students with plexi glasses at cafeteria tables, and classrooms desks, along with tests kits on hand, and guidelines such as mask wearing and social distancing are highly recommended.

Moreover two, student council members spoke with PNC about their thoughts on the first day back and plans for the rest of the school year,

Aubrey Magdalera, A senior at AOLG said, “Personally for me, I feel very excited, especially because the past two years have been unstable in terms of the covid and being back into school so I’m very hopeful that we get to spend the whole year in school.”

Furthermore, Kate Manaloto a sophomore at AOLG said, “There’s been a lot of face-to-face activities, we’re looking forward to those the most because like what Aubrey said, the pandemic has changed the way we work things here at the school.”

During the assembly, Ambassador Yuri Kim had a few words of encouragement to give students now that they are embarking on a new school year. She said, “Think about the world, think about where you fit into that world and what you can do, you can make a difference, I know that sounds like a slogan but it’s true though, it’s a big big world that needs mending, that needs progress, you are the people that can make that happen.”