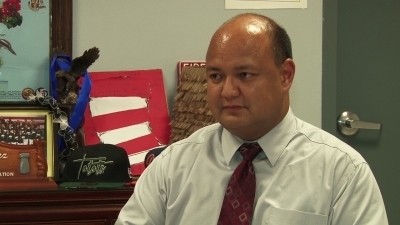 Jon Fernandez filed for another week of time off, but will he return as superintendent after his allotted leave runs out?

Guam – It’s official: with five sweeping motions, the Guam Education Board unanimously voted for Superintendent Jon Fernandez’s return. But in response, Fernandez is asking for a little more time to reconsider his role as superintendent.

Education Board Chairman Peter Alecxis Ada says Fernandez filed for annual leave over the weekend, but exactly how much leave Fernandez is asking for was discussed in a closed door meeting today between Ada and Fernandez.

The two met to establish Fernandez’s annual leave, and although Ada couldn’t share the details of the meeting, he told PNC that Fernandez is requesting 40 hours of annual leave or about a week’s worth of time off.

Ada said it’s still unclear whether Fernandez will resume his role as superintendent after that allotted time, but he remains hopeful that the superintendent will return.

Technically, Fernandez does not have to report to work before filing for annual leave. Acting Superintendent Joe Sanchez tells PNC that unlike sick leave, the general rule is that an employee can apply for annual leave at any time, much like vacation or paid time off.

Since Fernandez’s administrative leave is lifted, he can apply for as much leave as he’s accrued from the last academic year. Sanchez also notes that any and all personnel matters pertaining to the superintendent can only be approved directly by Education Board Chairman, Peter Alecxis Ada.

Last Friday, the Education Board unanimously voted to rescind Fernandez’s contract termination, subsequently asking for his return to DOE this morning. Four GEB members were tasked with speaking to the superintendent personally, but it was GEB Vice Chairwoman Marie Gutierrez who met with the superintendent on Friday. She tells PNC that she handed Fernandez the official letter detailing the five actions to bring back the ousted Superintendent and believes he will undoubtedly be speaking with his legal counsel during the week.

Ada told PNC that the subject of attorney’s fees was discussed during their meeting this morning. He did not specify if GEB will absorb the cost of Fernandez’s legal fees, the amount of legal fees Fernandez has incurred, or whether Fernandez intends to drop the multi-million dollar lawsuit against the board. Ada said he will have more information when he receives word from Fernandez’s representation.

Meanwhile, Fernandez’s legal counsel was not available for comment as of news time.