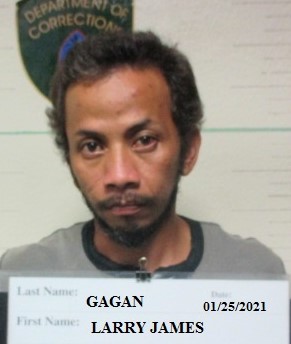 The victim in Sunday’s fatal shooting has been identified and details of the incident are now public as the shooter has been charged in local court with murder.

The shooter was arrested by police a day after the incident occurred in Dededo. He was identified by police as Larry James Gagan.

According to Gagan’s wife, he was close friends with the victim, a homeless man identified as Jerrick Unchangco. She told police that Unchangco had asked them for a place to live and Gagan allowed him to park his vehicle outside the couple’s makeshift Dededo home.

Gagan’s wife revealed that a day before the shooting there was an altercation but it was diffused. On January 24, another altercation occurred resulting in a brief struggle between the victim and a male guest. The male guest left the premises but according to police, Uchangco continued to argue with Gagan’s wife and sister. That’s when Gagan appeared behind the victim and shot him in the back before fleeing the scene.

A complaint filed against Gagan details that Unchangco was found face down on a bed within the home. Gagan claims he was only defending his family.

Court documents state that Gagan purchased a .22 caliber pistol for self-defense and he told police where to find the weapon. The weapon was not registered and Gagan does not have a firearms license.

A magistrate hearing for Gagan was continued to tomorrow to allow his court-appointed attorney Samuel Tekker to be present. Tekker was appointed as a result of a conflict of interest being present involving the public defender and alternate public defender representing the victim in multiple criminal cases.