Guam – A visitor industry operator exhibiting suspect business practices responds to scrutiny, after a Pacific News Center investigation raises questions about its licensing to do business and pay taxes on Guam. In response to PNC’s Dec. 7th story on an underground South Korean visitor industry, Eden Guam has responded with images of multiple business licenses on their Naver social media site. But a closer look at the documents, raises questions.

Naver is a popular South Korean social media platform. Chat Rooms are called cafes, and its membership approval is strictly controlled by the Naver Cafe administrator. As PNC has reported, one particular Naver Cafe, EdenGuam, is in the business of providing short term rentals.

Previously PNC reported based on the information given to us by Rev &Tax that there was no entity properly licensed to do business on Guam under the names that they advertised on Naver. These names include: Eden, Glory Eden, New Eden, Bless Eden, Dream Eden, and also Sky Eden.  No entity was licensed to provide bed & breakfasts, vacation stays, tour or car rentals according to DRT Supervisor MaeLinda Bayona.

Now on their Naver site, the same site that has marketed all the above brands, they state that “Eden” is simply a nickname, for a business licensed as Junyfore Inc. Rev and Tax has since provided a clarification on some of the businesses in question, and the only business legally registered under the name “Eden” on Guam, is a car-rental company. 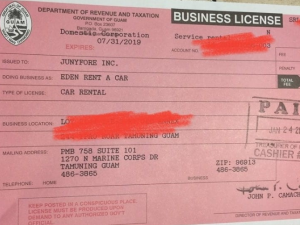 Business Licenses have been issued to local music school Junyfore Inc. to do business as a music school and tutoring service. Junyfore Inc. also possesses a license for Eden Car Rental. Other licenses remain under Junyfore Inc, not “Eden”, for room rentals, bed-and-breakfasts, and a tour company. Another license provided on Eden’s Naver site are for purported Junyfore owner JunYoung Park, to provide apartment rentals.

Through an analysis of Eden’s Naver cafe PNC identified six properties that Eden has used to conduct its businesses. These properties include condo units at the Summerville Residences, Horizon Condominiums in Upper Tumon, and a single house in Barrigada.

Core Tech previously stated to PNC that “Core Tech International Corporation (CTI) is a locally owned and operated enterprise of companies that has recently invested in our tourism industry with the acquisition of the Bayview and Oceanview hotels.  CTI has grown over the years because of our commitment to invest in Guam and the trust we have built by our dedication to do the right thing for our island in all we do. Core Tech Development took action when it became aware of these activities in the past and continues to have a zero tolerance policy for this and any other illegal activities. The protection and best interest of our residents, customers, and the island’s workforce is of the utmost importance to our company. We encourage and support the Government of Guam in protecting the financial health of our tourism industry and the GovGuam tax base which support the employment of the island’s workers and our ability to continue investing in Guam and supporting positive community development.” The same entity had been red-flagged previously for an issue pertaining to Gross Receipt Taxes. According to Rev and Tax, the entity still has no license to conduct business in Barrigada, or Horizon Condo.

The recent justification posted on Eden’s Naver site claims quote “We also make monthly tax returns through a Korean-American tax accountant.” However, as PNC reported last time, in order to make a reservation, they require a deposit in a Korean bank account, and the rest paid in cash, no credit cards. At the end of the day, there are presently no apparent means for Rev and Tax to regulate such foreign and cash transactions. Previous estimates show that this unregulated industry rakes in $23M a year.

Eden states on its Naver site that they are in communication with two attorneys, “Barm an” and “Nelson” and comments were made to initiate legal correspondence with our Broadcasting Company and reporter.