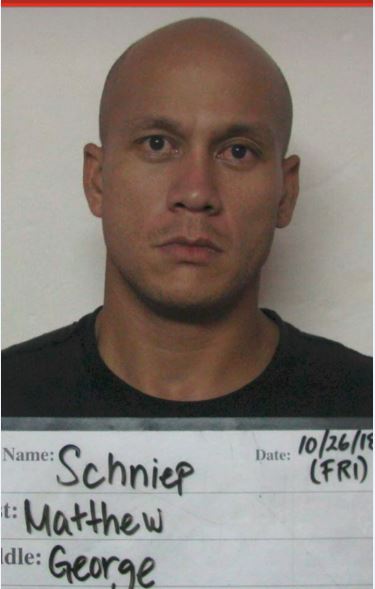 By Jolene Toves and Chirag Bhowjwani

Guam – Law enforcement guns were drawn as Judiciary of Guam Marshals allegedly tracked down and captured a wanted fugitive.

A PNC news source reported seeing law enforcement officers bearing firearms in front of Flamingo Restaurant in Anigua. The source stated that authorities were combing the area and appeared to be looking for someone. When PNC arrived on scene two men were already in handcuffs.

The first man has been identified as Mathew Schniep, who was apprehended wearing a black shirt and black pants. The second man is reportedly an employee of the restaurant, known to coworkers by the nickname Pompom.

While both men were escorted away in handcuffs, it appears that authorities were only there in search of Schniep, who apparently tried to elude marshals by entering the establishment as he was chased through the area.

“The fugitive was running from officials. He entered the back gate of the Flamingo Restaurant and tried to lock it to prevent the officials from coming in,” Flamingo owner Dongman Chang explained.

Chang says Pompom was on break when he opened the gate for authorities, leading to the capture of the very man they were after.

Chang says that upon questioning Pompom, Marshals learned there was an outstanding warrant of arrest related to a traffic violation in 2007.

“The employee was arrested and taken to Superior Court for his traffic violation,” Chang said.

Though at the time of the arrests they could not comment further, marshals said they had executed a warrant for arrest, and that a fugitive had been taken off the streets.

While Pompom appeared to be squared away with authorities, Schniep is scheduled to appear before Superior Court Judge Anita Sukola for a return of warrant on Monday.

This is a developing story, more information will be posted on PNC’s website at pacificnewscenter.com.

Jeff Marchesseault contributed to this report.