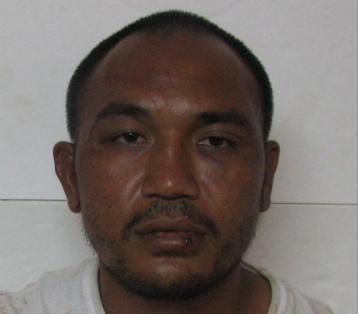 Three days prior a woman was sexually assaulted at Ipan Beach Park and her black toyota Camry stolen by the perpetrator.

We now know that suspect to be Pablo.

According to GPD Spokesperson Sgt Paul Tapao, they received information that the stolen vehicle was seen within the village.

Working on that tip officers patrolled the area spotting a black Toyota Camry with different plates matching the description of the stolen vehicle.

Officers found the plates to be fraudulent. When officers attempted to pull over Pablo he ran leading police on a car chase through the village.

Police say Pablo lost control of the car running it off the roadway.

“As officers approached the vehicle, the operator began reeving the subject vehicle’s engine and began backing in attempts to flee, subsequently colliding with a police cruiser. During this period, an officer fired shots at the subject vehicle as it posed a threat to the safety of the officers on scene,” stated Tapao.

Pablo allegedly then fled the vehicle into the jungle area of AS Lucas street.

But he didn’t get far as police were able to subdue him.

Pablo was taken into custody by detectives of GPD’s Domestic Assault Response Team and transported to GPD Headquarters in Tiyan for an interview.

He was arrested on charges of 1st degree CSC; 2nd Degree CSC; 1st degree Robbery; Felonious Restraints; Aggravated Assault; Assault with Intent to Commit CSC; Terrorizing; Possession of a Stolen Vehicle; Eluding a Police Officer; Assault on a Police Officer; Reckless Driving; Fraudulent Use of a License Plate and No Driver’s License.