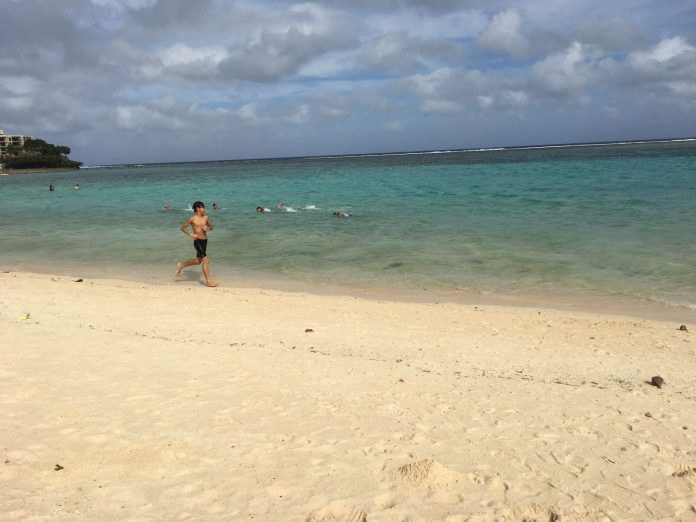 Swim Coach Ed Ching says he’s forced to have his swimmers train at the beach, which he says is not a proper place to train for competition.

Guam – With the closure of the Hagatna Pool for several months now, some competitive swimmers are left with no swimming pool to train in. And with the summer Olympics just months away, some swimmers may have their hopes and dreams dashed because they are unable to train properly.

“We’ve been training at the beach and then they expect us at swim meets that come up–oh, my swimmers have forgotten how to do flip turns. They haven’t done a good flip turn in months,” laments Ed Ching, a well known swim coach on Guam.

A flip turn is when a swimmer hits the wall and flips underwater. It’s usually done in a swimming pool. But in the ocean, with no walls, Ching says many of his swimmers are unable to train properly. That’s because the Hagatna Pool, the pool they’ve used for decades to train athletes, has been closed down for renovations.

“Just imagine if we were training–right now we’re training at the beach and the beach is terrible and we have no control. I have no idea if the kids are pushing hard, training hard. They have currents, they have fish who are biting their legs. They’re stepping on coral. Sometimes … the beach is low tide, high tide. When the tide is coming in, you’re fighting the current,” explains Ching.

The Hagatna Pool shut down last September for renovations. At the time, the Department of Parks and Recreation, under their former Director Raymond Blas, said it would only take a few weeks to complete the repairs.

Ching says he was told that Parks and Rec had the money to complete the renovations. But when Blas left and incoming director Robert Lizama stepped in, it was discovered that there was no funding to finish the project.

Lizama, however, explained to us that they were able to dig up funding and a procurement contract was awarded late last month. Lizama expects the renovations to be finished before the end of April.

But Ching says at this point, it may be too late.

“We just had three swimmers ask us about training, who are training in school, and they said they wanna come back and train for the Olympics because the Olympics is this summer. And normally to train for the Olympics, you start doing it two years ahead of time. A lot of them said, ‘Okay, coach, we wanna come back and start training under you,'” notes Ching. “I told them, ‘You can’t because they closed the pool.’ They go, ‘What?’ One of them came back and didn’t know the pool was closed. I said, ‘Sorry, what can I do?'”

Sure there are other swimming pools on Guam, says Ching, but none that are Olympic sized. The only other pools that meet the requirements on Guam are at the Charles King gym inside Naval base which is only available to those with military base access and the Leo Palace pool, but that is a private pool only open to hotel guests.

Ching adds that having no Olympic pool to train in is like telling a track runner to train in the jungle.

Former DPR Director Ray Blas declined to comment on the matter, noting that he is no longer the director of Parks and Rec.