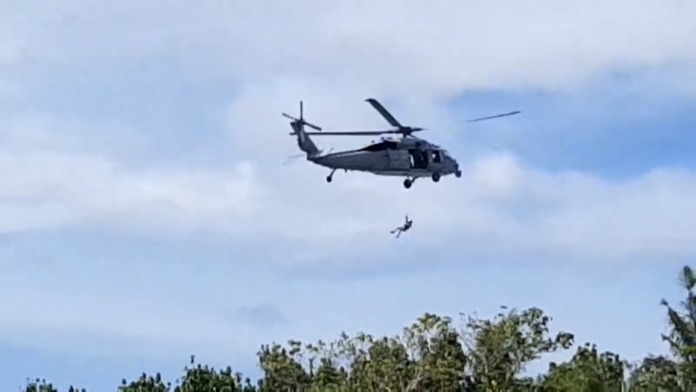 Guam – After several hours of searching, the body of a missing swimmer was recovered off the shores of Tanguisson Beach but at this time authorities are not saying whether the man survived.

The man and his friend, both Korean tourists, were reportedly swimming at Tanguisson Beach this morning. The swimmer continued to snorkel while his friend remained on shore. At around noon, however, the tourist who remained on shore lost sight of his friend.

“Shortly after 12 o’clock today, our units received a call for a missing swimmer over here at Tanguisson Beach. The swimmer was with one other gentleman when the gentleman lost sight of him from the shore while the individual was swimming. Our units, our rescue number two out of Agana, rescue number one out of Dededo, along with the U.S. Coast Guard, the small boat–the 45 out of there, the HSC-25 responded,” explained Reilly. “At about 14:20, HSC spotted the body and they were able to recover him and transport to Naval Hospital.”

The man’s condition is still not known as of news time. We reached out to Naval Hospital Spokesperson Jaciyne Matanane who told us she could not release details about the man’s condition without the victim’s name.

On Sunday, Guam Homeland Security issued a high and hazardous surf advisory but it was only in effect until Monday at 6 am.