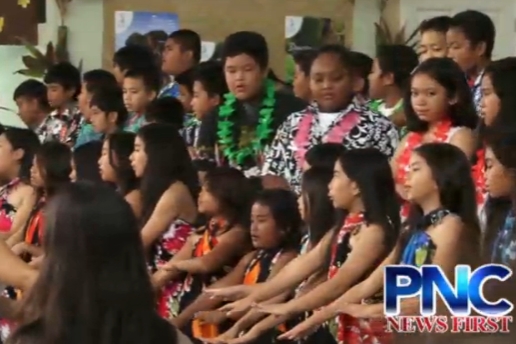 Guam – Are you Chamorro and have lived in Guam for most of your life? Well, a research group from Switzerland would like for you to participate in their study called “English in Paradise”?

Switzerland Graduate Research Student Eva Kuske says, “I’m part of a research group from Switzerland and we’re interested in the English spoken in the Micronesia but I’m specifically focused on English on Guam so I’m looking for people who were born and raised here, mostly with the Chamorro background. I’ll talk to them casually, kind of record and collect what their speech sounds like and collect what their speech sounds like.”

We ask, of all places and coming from Switzerland, why study English in Micronesia?

Kuske explains, “The thing about Micronesia is that it has a very interesting colonial past. The Japanese have been here, the U.S., for some islands, Britain, Germany and Spain, and that has influenced the languages. It’s interesting to us how that came to be, and what that language then sounds like. Does it sound American? Does it sound Spanish? What does it sound like you know, so that’s why we’re here.”
Kuske says she’s been on island for three weeks now and she plans to stay and meet more people from Guam before she leaves in August. “I’m really liking it. It’s very warm compared to Switzerland but I was amazed at how open the people are. I can just talk to someone and they’ll invite me to a picnic, this kind of openness, I’m not used to. It’s really nice,” she says.
She says for the study, she records the entire conversation. Then, she will then listen and review how the participant speaks. Kuske says, “One thing that I’ve noticed when I talk to people, people who have left the island for years, the way they pronounce the word ‘family’ is very typical. In the states, they say family with an ‘e’, in Guam they say family with an ‘ah’. Their mouth is almost open. Do you hear the difference?”
Eva says her team is planning on publishing a book after all the research. Kuske says, “Saipan has been done. One of my colleagues went to Saipan last year and collected date, Kiribati, Nauru, Kosrae, and quite a few years ago, a professor from Tokyo went to Palau and collected data there.”
For those who want to participate in the study “English in Paradise”, e-mail Kuske at english.guam@gmail.com