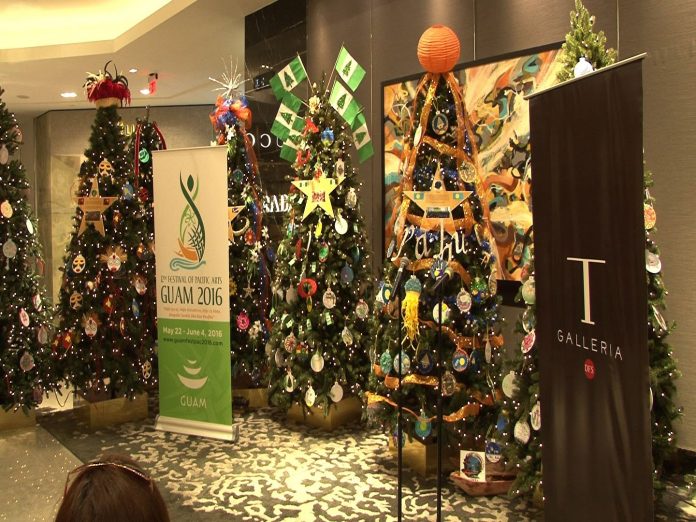 T Galleria Guam by DFS and most of the island’s elementary schools are excited to announce that the annual Festival of Trees is back. This year is special because they incorporated the Festival of the Pacific Arts.

Both have been incorporated into one!
With less than 160 days until the 12th Festival of Pacific Arts, T Galleria Guam by DFS and most of the island’s elementary schools are artfully utilizing the 3rd Annual Festival of Trees to excite residents about the rich cultures that will be represented on Guam during FestPac next year.
T Galleria Senior Manager Local Buyer Francis Guerrero says, “DFS has been proud of our participation with the community on the island. This is the 3rd Festival of Trees is what you’re seeing today. We intentionally used the theme Festival of the Pacific Arts to spread awareness for our people to understand what Fest Pac is all about. Interestingly here, we have 27 competing and one DFS did for themselves. The schools really went out after this. If you see the ornaments, you’ll have a hard time voting.”
It’s not just about decorating, each school had to research about their Pacific island nation and in the process learn more about the Festival of the Pacific Arts
Adacao Elementary School Tillie Blas says, “We had the children research Norfolk island. Norfolk was assigned to us by DFS. From there, the kids looked for different things that would represent the island, obviously, the Christmas tree.”
AES Cef Duarosan says, “Overall, it’s an overall learning experience because the kids were all aware. We didn’t just touch up on Norfolk island, we also integrated what’s going on in May so now they’re more aware of what’s going on.”
Next up is Inarajan Elementary School with the festive Palau Christmas tree. IES Michelle Pineda says “Aside from them learning about Palau, they compared and contrasted the Chamorro culture. They had a better understanding because it’s something they’re familiar with. For our fourth grade students, it became a part of the Social Studies of cultural diversity so we had our students research Palau and we showed videos, they wrote about it. They had free choice, they used their creativity.”
According to T Galleria, a total of 1,400 handmade ornaments and decorations adorn the trees.
Guerrero says, “Many of them learned about islands they never knew existed so this was a good program to get involved with. We’re excited about the outcome. Everything here is just amazing.”
All 28 trees are currently on display at the Festival of Trees Forest located inside T Galleria near the Prada, Loewe and Fendi boutiques. If you want to check out the Festival of Trees, don’t forget to place your votes as well! Voting is ongoing through Dec. 20.
Oh and don’t forget the post your photos with the hashtag #dfsfestivaloftrees.
The competition is exciting and fierce as the first place winner will receive $2,000, second and third place winners will receive $1,000, and fourth and fifth place winners will receive $500 each. Every school will receive a $200 for their participation. Winners will be announced at a special awards ceremony on Dec. 27 at DFS, which the public is also invited to attend.