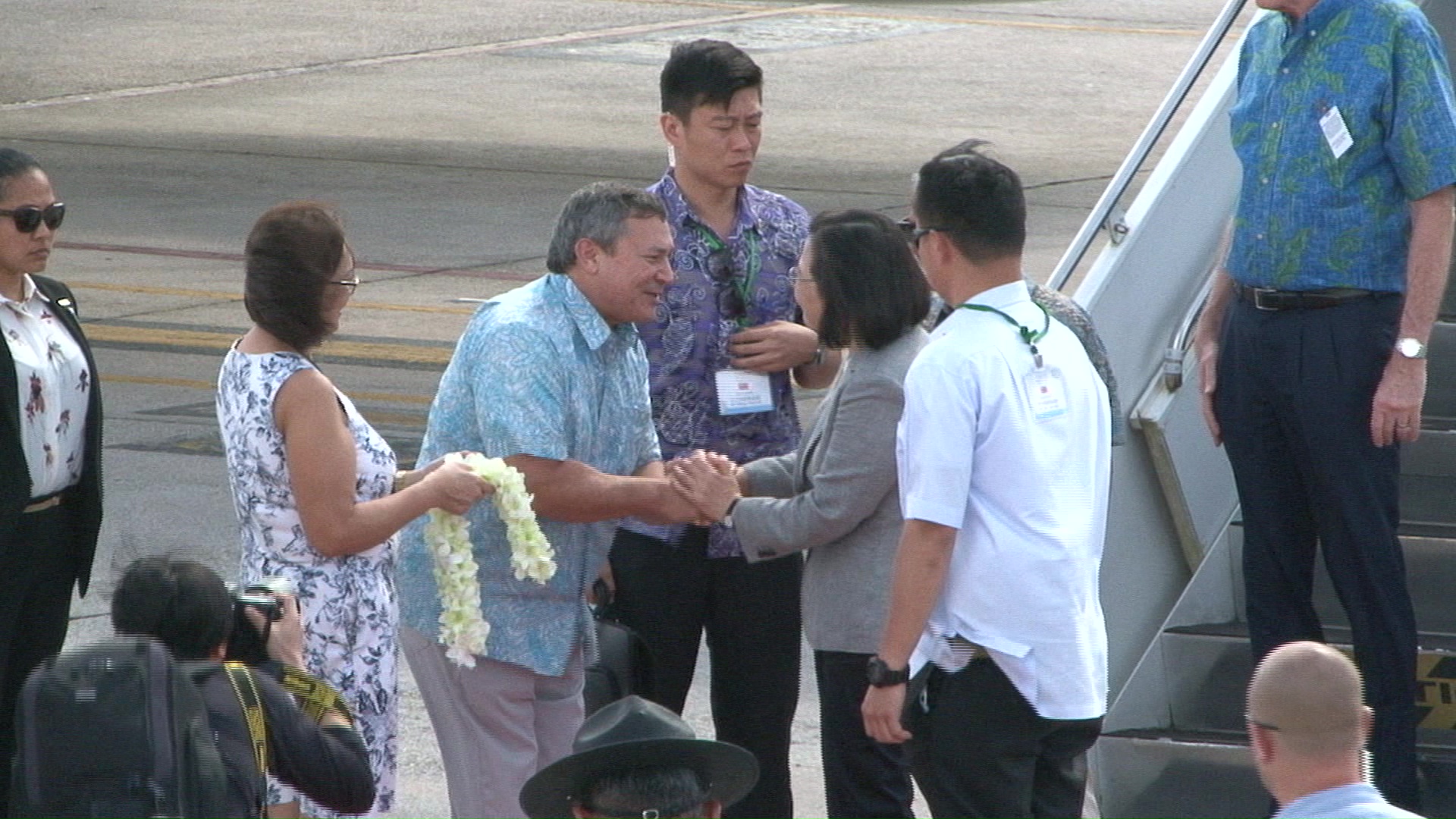 Tsai Ing-Wen is the first female president of Taiwan and is also a member of the Democratic Progressive Party.

The president received a red carpet welcome at the A.B. Won Pat International Airport where she was greeted by Gov. Eddie Baza Calvo and members of Guam’s Taipei Economic Cultural Office.

From there, President Tsai received a full Guam Police Department escort from the airport to the Latte of Freedom where she was also greeted by members of the Guam Legislature and other dignitaries.

“It is my honor to welcome her excellency, President Tsai, to the island of Guam. Welcome to Guam,” Calvo began.

President Tsai then addressed the crowd, standing behind a podium with the official state seal of Guam flanked by the flags of Guam, the U.S. and Taiwan. Her address focused on the similarities between Guam’s and Taiwan’s history and culture.

“Taiwan and Guam share a unique relationship. Our historical and cultural roots date back centuries. Research suggests that the CHamorro people of Guam are very closely related to the indigenous people of Taiwan,” she noted.

Pres. Tsai is a member of the Democratic Progressive Party and is also the first female president of Taiwan.

The historic visit to Guam follows her diplomacy trip from neighboring Pacific islands.

However, according to reports from the U.S. State Department, her diplomatic visits are deemed unofficial and private, no doubt to assuage any concerns from China, which has reportedly frowned upon Pres. Tsai’s diplomacy efforts.

While today’s visit was labeled “unofficial and private,” with the state seal up, flags of  the two nations on display, a legislative resolution presented by the Guam Legislature and the exchanging of gifts between Calvo and Tsai, the “welcoming ceremony” certainly resembled an official visit.

“We are cooperating with the promotion of trade and economic development which will benefit both our societies,” Pres. Tsai said in her speech. “This partnership is strong but I know we can do more. We look forward to discussing with Gov. Calvo and your team to find further areas of potential cooperation. I’m confident we can bring Taiwan and Guam closer together.”

Pres. Tsai’s visit to Guam comes on the heels of reports that Chinese H-6K “Badger” bombers flew within a 1,000-mile range near the territory to test defense zones. Defense News maintains that the bombers pose no imminent threat to Guam and they stressed that there is no imminent danger of a conflict with China.

Bruce Chen, the general manager of China Airlines, tells PNC that the president and her delegation will only stay on Guam overnight and will depart Saturday morning.