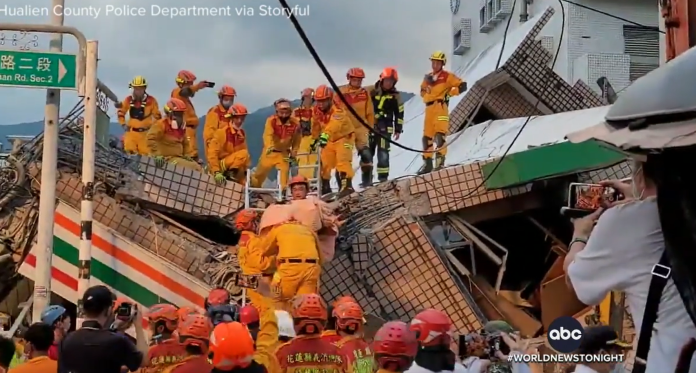 In Regional news – a major earthquake ravaged Taiwan, killing at least one person and injuring many more.

Reporting on the event is PNC’s Don Sulat.

According to ABC News, at least 1 person died and 9 people had minor injuries so far.

Moreover, ABC News says that following the Quakes destruction, a 3 story building was toppled – which trapped 4 people inside which included 1 baby, along with leaving around 400 tourists stuck on a mountainside, and knocking part of a passenger train off its tracks.

Viral videos also show a sports center toppling down as the quake hit the island.

Following the major earthquakes, Guam’s Offices of Homeland Security and Civil Defense said that there is no tsunami threat to both Guam and the CNMI.

Moreover, Governor Lou Leon Guerrero said that Adelup will be monitoring for any developments to assess their options and to help those affected and to help 1st responders.

ABC News says that more than 7,000 households are without power in Yuli, along with their water pipes being damaged.

The quake was felt at the north end of Taiwan at its capital, Taipai.