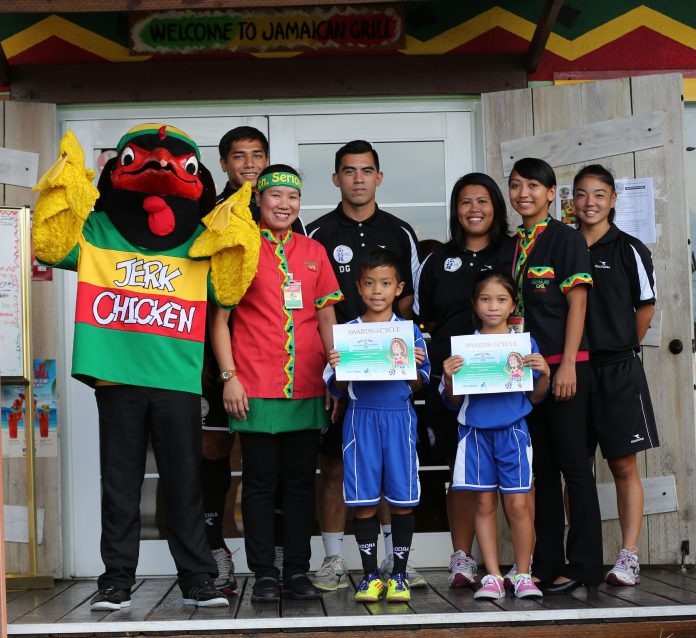 Harmon, Guam – Kyle Takano, Maria Calvo and Mark Chargualaf were recently recognized by Guam Football Association National Academy directors and staff as the Jamaican Grill National Academy Players and Coach of the Cycle, respectively, for the program’s second session of 2013.

“Despite his small stature, Kyle Takano is one of our more ferocious players,” said Dominic Gadia, GFA National Academy Director for Boys. “He is technically sound with the ball and is most dangerous in the final attacking third of the field. He is starting to show the best attributes of an attacking player and his biggest strength is his shooting ability.

“He’s a great kid to have in the program and is a very influential player in his age group. Kyle is consistently progressing and always eager to learn new techniques and skills,” Gadia added.

Takano, from the National Academy’s U10 division, will suit up for the Wings FC and Calvo, in the U8 division, will play for the Orange Crushers in the upcoming Docomo Pacific Robbie Webber Youth League.

“Maria is very comfortable with the ball at her feet,” said Kim Sherman, GFA National Academy Director for Girls. “She is proficient for her age group in dribbling technique and 1 v 1 situations. She is also able to retain possession under high pressure and play the ball in tight spaces.

“In addition to her technical ability, Maria is distinguished among her peers because of her maturity as a player. She is very self-motivated and brings a high level of intensity to each training session. She strives to be the best at every drill and enjoys herself every time she enters the pitch,” Sherman added.

Chargualaf, who received his AFC “C” Coaching License last year, will be traveling as an assistant coach to Gadia with Guam’s U16 men’s national team to Vientiane, Laos for the AFC U16 Championship Group H Qualifier where the team will face Brunei Darussalam, Korea Republic, Laos and Malaysia. Earlier this year, he was an assistant coach for the Guam U18 men’s national team, also under Gadia, for the EAFF U18 Youth Tournament.

For each of the winners’ efforts, Jamaican Grill awarded certificates of achievement as well as dining certificates at the restaurant’s Dededo location.