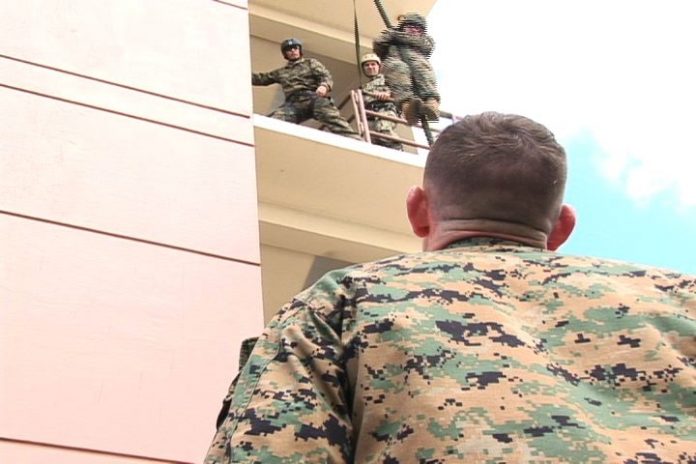 Tanguisson beach was closed on Wednewday January 13th to allow marines from the 31st Marine Expeditionary Unit or MEU to conduct a live fire Realistic Urban Training Exercise or RUTEX.

Guam – Tanguisson beach was closed on Wednesday January the 13th to allow marines from the 31st Marine Expeditionary Unit or MEU to conduct a live fire Realistic Urban Training Exercise or RUTEX.

The exercise is a certification of the marines maritime raid force and their ability to conduct specialized limited scale raids in urban environments. The RUTEX training actually began earlier this month on the 5th and most of it is being conducted in the old South Finegayan housing area on the NCTS Naval installation. On the 13th the marines were training near the Tanguisson power plant which means the roads to Tanguisson beach and the beach itself were closed at 5pm on the 13th.

“I don’t think the noise signature or the effects from rotar wash from the aircraft are going to be noticeable. If they are it’s gonna be very limited. You might hear some gunshots in the distance. You might hear some flash bang grenades in the distance going off but nothing that is going to create some sort of disturbance for the local population,” said Major Breck Perry of the U.S. Marines. “We don’t foresee any disruption in traffic flow or any disruption in the community however we are gonna be making that advisory that Tanguisson will be strictly off limits from certain time frames,” said GPD Officer Paul Tapao.

“Working through real life scenarios but not necessarily standing down the island of Guam so that we can do their training. It’s to be able to put it in certain packages so that they can get the realistic training that they need as well as working our coordination to be able to know that these types of scenarios exist and that if it was real world we would be able to react and what kind of steps we would need to take to be able to do that,” said Homeland Security Adviser Brigadier General Johnny Lizama.

Lizama says there has been outstanding coordination across the board from the unit in Okinawa, the local Marine Corps Activity Guam and all others involved.