As of mid-September, FOB Kunduz is a practically barren flat area of land. Leonen’s group were forced to leave the compound in late August and were reunited with their Alpha brothers and sisters at Camp Spann, which is roughly a eight-hour convoy trip away.

This is good news. This demonstrates action as part of President Obama’s plan to withdraw U.S. and coalition forces in Afghanistan. The exodus entails the shutting down of FOBs, camps and other U.S.-occupied facilities. FOB Kunduz is one of several in Regional Command-North that’ll be turned over to Afghan National Security control later this year.

[A platoon from the Guam Army National Guard’s Alpha Company, 1st Battalion, 294th Infantry Regiment, stands outside its temporary home late August at Forward Operating Base Kunduz, Afghanistan. This security forces team has since moved to Camp Spann, reuniting with their Alpha brothers, as FOB Kunduz began shutting down as part of the United States and coalition forces’ withdrawal from Afghanistan. The tents behind the soldiers no longer exist as of mid-September. (U.S. Army National Guard photo by Sgt. Eddie Siguenza/Released)]

“Over there,” said Leonen, pointing to an isolated area that was once a tent city. “That’s where we used to live. There’s nothing there now except the concrete T-walls.”

Even the thousands of T-walls, security barriers as high as 15 feet and each weighing more than a ton, will be removed, says Capt. Thomas Feeney, a U.S. Army logistics/transition officer who led the closing of FOB Altimur earlier this year. There is an option to destroy them if there’s no further need.

“T-walls are a perfect example,” Feeney said. “It can be more cost-effective to bury these in place than to waste money to transport these chunks of concrete from base to base.”

The Alpha soldiers performed their last Kunduz-area mission mid-September. They escorted Air Force representatives who oversee projects at district and provincial headquarters in the Chahar Dara district. This is their third guardian angel/security forces mission in the Kunduz area since leaving it and perhaps their last.

First Lt. Christopher Candaso, Alpha platoon leader, said his soldiers are adapting to their new mission routine. They now have to convoy a minimum of six to eight hours — with a rest overnight at Combat Outpost Khilagay about four hours away — to perform a specific mission. This is a turnaround from what was done before. 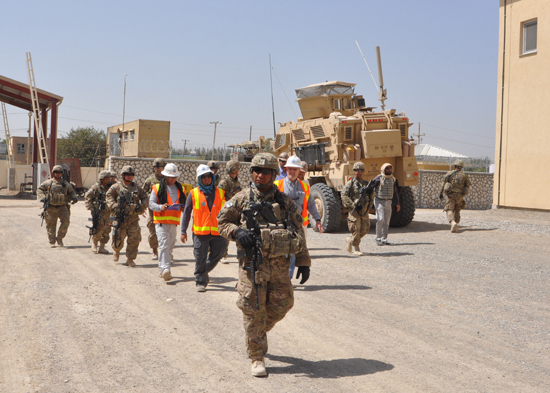 “The good part of this is everyone’s back at Spann; everyone’s back together,” added 1st Lt. Peter Guerrero, Alpha Company commander. “They’re still going to conduct missions, but they’re longer and farther. It’s a lot more risky because there’s more driving. They’re out on the road a lot more now. No matter what mission they’re on, they always perform above and beyond.”

“The distance requires a lot more movement,” said Leonen. “It’s a lot more challenging because there’s a lot more planning. The good always outweighs the bad. No matter what, we’re always going to be prepared.”

Candaso and Leonen credit all their soldiers for the positives aspects of their Kunduz experience. Everyone remained mission focused, Candaso said. In the first weeks of arrival, they had to network with other units and sources to obtain necessities. Everyone chipped in to make their living area habitable, and operations center workable.

“We didn’t fall under anyone when we got here. We had to work to get specific things,” said Candaso.

Guam instantly became a part of the big OEF picture since arriving in April. It’ll still be a part of the OEF exodus spotlight as one of the last units in Afghanistan. President Obama declared in January 2013 “America’s war in Afghanistan will be over by the end of (2014).” (Source: http://www.whitehouse.gov)

“Make no mistake, our path is clear,” the president stated. “We are moving forward because after more than a decade of war, the nation we need to rebuild is our own.” 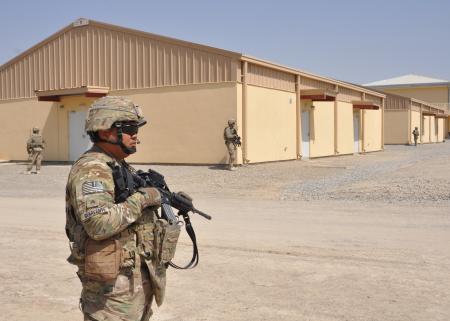