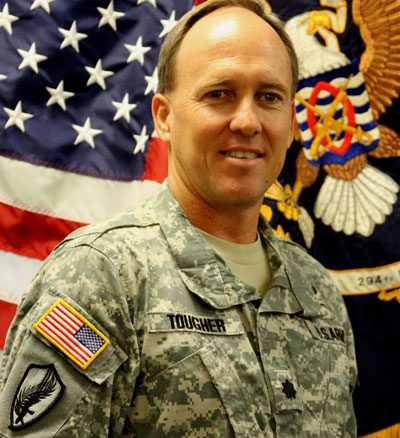 Guam  –  The Commander of Guam’s 1-294th Infantry Regiment, Lt. Col. Michael Tougher has been selected for assignment to the U.S. Army War College, reporting to the Stanford University Hoover Institution as a National Security Affairs Fellow.

Lt. Col. Tougher will lead about 500 Battalion Soldiers on a unit formation run through Anigua, Agana Heights and Hagatna, this Saturday, June 7th, beginning at 5:30 in the morning.

The Soldiers will form up, at the Adelup Parade grounds, beginning at about 4:30 a.m.  The unit be running up Snake Road (Route 7), towards Agana Heights, down San Ramon Hill to West O’Brien Drive, making their way back to Marine Corps Drive (Route 1), then head south back to Adelup along Marine Corps Drive.

The battalion returned from a 10-month deployment to Afghanistan, in support of Operation Enduring Freedom, earlier this year.  This run will mark the final run in which Lt. Col. Tougher will lead as Commander.

“I always look forward to our battalion command runs, they are a great opportunity to motivate troops and leaders. This run is different and somewhat bittersweet. I am excited to have the majority of our battalion back together and I look forward to the camaraderie and pride that we exhibit as a collective group. The fact that this run will be the last time that I have this opportunity reminds me that my direct responsibilities to this great unit will be ending soon. It is truly heartrending for me to walk away from my role as the commander of so many great Soldiers,” said Lt. Col. Tougher.

Soldiers will be posted at all intersections and along the route for safety; however, motorists are requested to drive slowly and proceed with caution as they drive around Anigua, Agana Heights and Hagatna during the hours of 4:30 a.m. until about 8 a.m. on Saturday, especially in the vicinity of the formation.