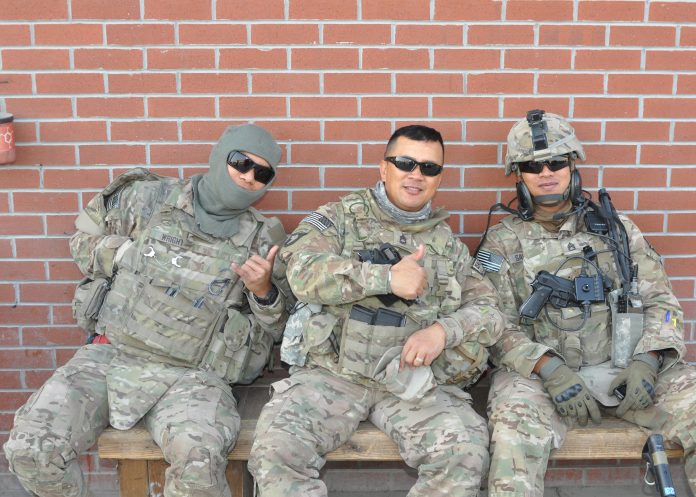 However, there’s still a lot that needs to be done. Guam needs to complete its last mission responsibilities and that means securing everything it had logistically obtained and properly accounting for personnel and property before leaving Afghanistan.

“We want to make sure that everything is handed off properly to our replacements,” said Lt. Col. Michael Tougher, Task Force Guam commander. “Our goal is to make things easier for the unit arriving soon. We will be share lessons learned from the issues we had to overcome and relate what worked for us. We want to make this transition easy and problem-free for both commands.”

TEN – Approximate number of days until Task Force Guam’s first wave of bodies starts leaving Afghanistan. It’ll take a few trips to send close to 600 soldiers out of the country, and even more of an effort to bring together the soldiers who were stationed at more than a dozen locations throughout the country.

EIGHT – Average number of hours it’ll take to fly from a European destination – the initial site Guam soldiers will head to when leaving Afghanistan – to United States soil. Guam Soldiers will still have to medically and administratively out-process at its de-mobilization station. Unfortunately, this will take a few days.

SEVEN – The number of subordinate Companies the 1st Battalion, 294th Infantry Regiment brought to Afghanistan that will successfully complete this historic OEF. Guam has never sent a battalion-sized element to any military operation.

FIVE – Times 10 and in pounds, the average weight of body armor a soldier carries around when on a mission. This includes the tactical vest, ammunition, weapon and necessities (like snacks) a soldier drapes on his body almost every day. This is important information because, in a few weeks, it will no longer be a concern.

THREE – Number of Yellow Ribbon ceremonies during the upcoming Reintegration process. These will occur at different times throughout 2014.

ONE – The loneliest number won’t be much longer once 1st Battalion, 294th Infantry Regiment and its 550-plus Chamorro warriors return home and everyone becomes one big happy family – once again.

Coincidentally, when a company-sized Guam Guard element supported OEF in 2008, Guam’s last Afghanistan mobilization, its replacement was also from the 82nd Airborne Division.