Guam – On a crisp, spring morning, in the capital city of Kabul, Afghanistan, warriors far from home came to a solemn pause, to reminisce and honor the lives of fellow fallen warriors.

The ceremony was attended by more than 500 fellow Soldiers, contractors and friends of the two Task Force Guam Soldiers and four civilian contractors who died in support of Operation Enduring Freedom in Afghanistan on May 16, 2013. Early that morning, a suicide bomber crashed into the lead vehicle of the Coalition Force convoy.

The Guam Soldiers honored during the ceremony were SGT Eugene M. Aguon and SPC Dwayne W. Flores, along with the four civilian contractors, all of whom were military veterans.

LTC Michael Tougher, Battalion Commander of the 1st Battalion, 294th Inf.  Regt., Task Force Guam, shared his memories of the fallen Soldiers in his remarks during the ceremony.

“Today we mourn the loss of two exceptional Soldiers. Task Force Guam is blessed with great Soldiers. Our Soldiers possess the right attitude, proper military bearing and a great deal of pride. Dwayne Flores and Eugene Aguon were two of our best,” Tougher said.

SPC Brian Muna and PFC Brandy Martinez both gave personal accounts of their friendships with SGT Aguon and SPC Flores. “I will always remember him as Rambo, a great NCO, a great friend and a great mentor,” said Muna about SGT Aguon.

PFC Martinez commented that SPC Flores loved what he was doing. “ I kept telling Dwayne that we’ll be pulling him back into the office…but he would just say, no, no, no…just leave me where I’m at!” 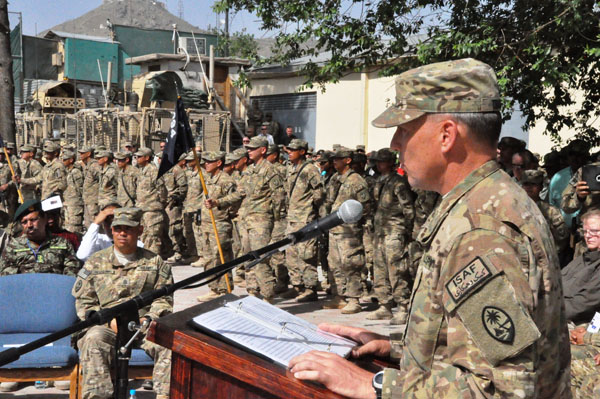 While the flags of coalition nations flew over the NATO Training Mission-Afghanistan courtyard where the ceremony was held, the somber presence of two battle crosses and portraits of each of the fallen Soldiers, mandated a quiet presence in the midst of the usually bustling compound.

Afghanistan, a country weary and torn by years of endless battles, reflects a difficult way of life for most Afghans. However, in the middle of all this turmoil, a rose bush on the edge of the courtyard with fresh petals springing out of their buds seems to symbolize a hope that even in the dreariest of situations, there is an eventual reward and beauty for the hard work that is being cultivated in this country.

The wish expressed by all personnel in attendance is, that the efforts and lives of their fallen comrades, bring forth the hope and promise of a better future for the people of Afghanistan.