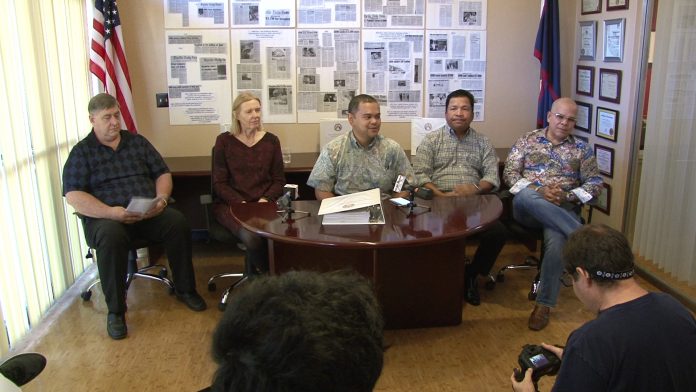 The task force released its findings during a press conference this morning at Senator Dennis Rodriguez’s office.

Guam – In the midst of major changes at the Guam Memorial Hospital, a GMH task force released the results of its eight-month research on ways to achieve long-term success at the ailing hospital.

The task force determined that a complete renovation would be too expensive, but they are looking into a possible public private partnership.

Led by Health Committee Chairperson Senator Dennis Rodriguez, Jr., the task force identified a 10-point plan which involves legislation, reform of the island’s MIP and Medicaid programs, a possible public-private partnership and even establishment of a medical school within GMH.

“I intend to take this out to the community, to as much people as I could to let them know what the plan is because this really lays that groundwork of establishing and pursuing long term sustainability,” the senator says.

One of the major proposals in the task force’s findings is allowing for the Guam Economic Development Authority to develop and publish a request for information for interested parties to form a public-private partnership with the government of Guam.

The reason is because the task force initially looked at reconstruction of an old and deteriorating hospital. However, the task force determined it would cost the residents of Guam too much, upwards of $100 million and possibly more.

So the next best option was for a public-private partnership.

“We’re hoping that in the development of this RFI that we’re going to, I’m going to be pursuing through a legislative mandate, is that if we do get into this public private partnership or perhaps a complete privatization of the hospital that a new facility is part of that package,” says Rodriguez.

Another potential solution, says the senator, is legislation that would require employers to offer health insurance coverage to all of its employees by providing incentives and even assistance.

Other solutions include establishing a medical school within GMH. By transforming the hospital into a teaching school, the report states, it would give GMH more opportunities for grant funding.

In addition, off-island physicians, such as those in the Philippines, would be able to seek US medical education and licensure on Guam, which could in turn expand specialty services offered on island.

“No longer can we just look at the hospital and find ways to fix the hospital becuase that approach doesn’t work. It’s a whole system of care, it’s access to care for our people, ensurig that there’s health insurance coverage that our people have, ensuring the resources that we have in our community supports the needs of our community,” he explains.

The task force is made up of 14 members. You can read the full report by clicking on the file below.