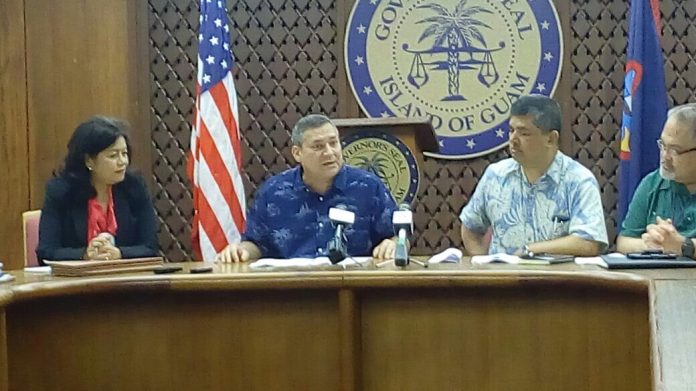 The tax hike measure proposes to increase GRTs to 4.75 percent.

Guam – Governor Eddie Calvo has introduced two measures that propose to raise money for the Guam Memorial Hospital. One authorizes millions in borrowing the other would raise taxes.

“Today I will be transmitting two bills to the 34th Guam legislature and this will fund both the current infrastructure needs and also continued operational funding required to improve patient care and also more favorable outcomes for Guam’s only public hospital,” said Governor Calvo.

The first bill authorizes GovGuam to borrow $125 million on the bond market for capital improvement projects at GMH.

The second bill proposes to increase the business privilege tax or gross receipts tax to 4.75 percent from the current rate of 4 percent.

“Now this will be to fund the debt service on the $125 million bond but also continued operational funding subsidy for the GMH to make good on those gaps that we’re so familiar with in regards to the inability of folks on this island to pay for services. This measure will also ensure that GMH receives operational funding for a minimum of the next 10 years,” said Governor Calvo.

In fact, the administration says if this bill is passed GMH will not need any money from the general fund. The Governor did note that the federal government has not properly reimbursed the hospital for compact impact migrants and has not approved higher Medicare and Medicaid reimbursements.

“We can do all the hand wringing we want and even me I’m guilty of it. I can point as much fingers as I want to Obama or to Trump or to the Congress but it doesn’t solve the situation. Now it’s time for us to solve it, once and for all,” said Governor Calvo.

The bill exempts medical and dental clinics from the proposed tax hike. The Governor also announced that they have received two bids on the construction of a new maternity ward yesterday. Calvo said they hope to award the bids by next week and he hopes to have a groundbreaking for the new maternity ward in the fall.