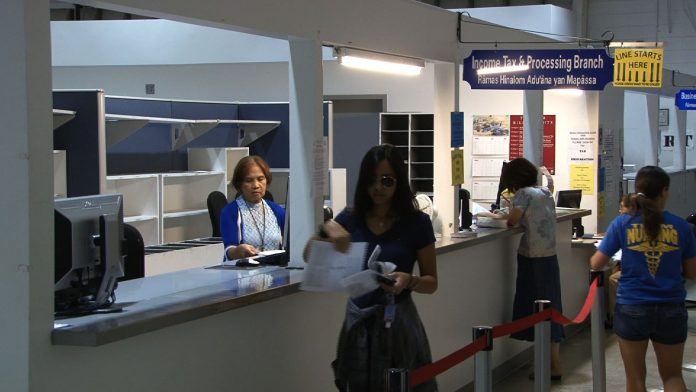 Guam – The current balance of the income tax refund trust account, the account where money for tax refunds are supposed to be deposited, is only $235.35 cents.

This is according to the latest bank statement that was issued on January 31.

We are now several weeks into the tax season and while thousands of residents have filed their taxes for income year 2015, not a single refund has been paid out.

Meanwhile, the Income Tax Refund Efficient Payment Trust Fund account balance is at $235.35, at least according to the latest account statement that was filed with the Guam Legislature.

We sat down with Department of Revenue and Taxation Director John Camacho who says Rev & Tax is in constant communication with the Department of Administration, which has oversight of the Tax Refund Trust account.

“When we communicate with the Department of Administariton and the fiscal team, there will be a certain point that we will say that we have the sufficient funds to release so much and maybe we can on a weekly basis or when the funds are built up. Because eventually how the reserve funds builds or the efficiency income tax reserve fund builds [is] by people that are paying income tax,” explains Camacho.

Camacho gives us a break down of how many people have filed, how much is owed so far and an idea of when filers can begin to expect their tax refunds.

“This month we started processing the 2015 returns. We’re basically, as of Friday last week, which is all returns filed up to January 29, which roughly we processed about 4,000 returns,” he says. “We roughly have right now about $17 million that are A-status, which means they’re error free and ready to be refunded. Of that $17 million, $2 million would be for prior years, 2014 and prior years.”

PNC: “So what’s the soonest you think taxes will be paid out?”

“Well basically right now, we do communicate with DOA. They normally with the fiscal policy team, we normally communicate and right now, like I mentioned earlier, there is $17 million in refunds that is ready to go out, but we wanna try and take care of the 2014 tax year and prior years first. So we’re looking at trying to get that $2 million out as early as possible. Then we start looking at the people that filed early January moving forward,” notes Camacho, adding that April is a typically a good month for DRT since April 18 is the deadline for filers to pay taxes they owe.

Guam law requires that DOA deposit about 27 percent of every income tax dollar into the tax refund account and that “the trust fund shall not be commingled with the General Fund or any other funds of the government of Guam.”

We contacted the Department of Administration to get the latest balance on the Tax Refund Reserve account, but we have not received a response as of news time.

You can read the latest bank statement by clicking on the file below.