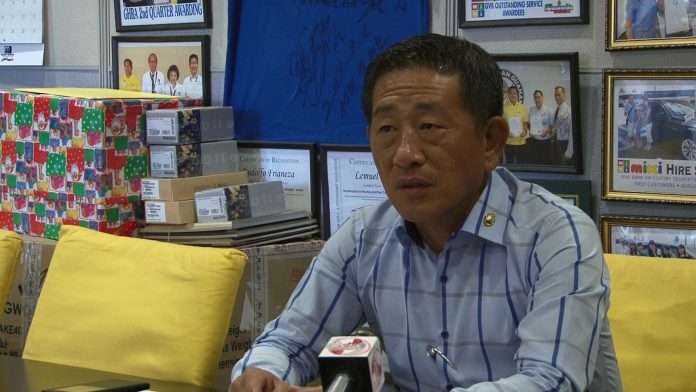 Miki Taxi owner Hong Soon Im says overall he agrees with an Airport RFP that would give an exclusive concession contract to just one taxi company, but he believes the current requirements are too strict.

Guam – Miki Taxi, one of four taxicab companies servicing the AB Won Pat International says they are just as frustrated with an RFP the Airport Authority issued that would give an exclusive concession contract to just one taxi company.

“Even I don’t like it,” says Hong Soon Im, Owner of Miki Taxi.

Miki Taxi is one of the largest taxicab service companies on Guam and one of only four taxi companies operating out of the AB Won Pat International Airport. Im says he’s not satisfied with the requirements of an RFP the Guam International Airport Authority issued last month that proposes to give an exclusive concession contract to only one taxicab company.

Last week we spoke to Noel Roque, on behalf of the three other taxi companies servicing the airport, Independent, Resort and Wave. Roque noted that those three companies would not be able to submit a bid because they wouldn’t be able to afford it. In fact, Roque says many of the taxi drivers are concerned that this RFP would put them out of work.

But Im says he doesn’t understand why his company is being singled out.

“I don’t know why they excluded me and those three [companies], they got together and they went to the senators office,” says Im.

Although Im does not agree with the strict requirements of the RFP, he believes overall that the Airport management is on the right track. He says he hasn’t submitted a proposal because he has questions of his own.

“I already have many questions because I’m not satisfied, ” says Im.

For example, he says, one of the requirements is that vehicles cannot be more than five years old.

“I think in Guam the taxis that are five years old, it’s still brand new. But to compare with buses, [they are] 15, 20 years old. They are making all the air pollution and they are noisy and oil is dropping on the ground. But taxis [don’t],” he points out.

This is just one of the many questions he plans to bring up at a pre-conference meeting today with airport officials.

Im says his business model is actually in line with the airport’s plans to streamline services for tourists. Since he opened up his taxi company 20 years ago, Im says his goal has been to improve overall customer satisfaction for the tourist experience on Guam.

“So this kind of tourism, one part for taxi, one part hotel, one part for bus, one part for options, whatever they need to merge together and try to make the customer happy so we can have good synergy. But at that time the taxi service was bad and had a bad image,” notes Im.

“If they have a bad experience from the beginning at the airport all the way down back to their country they’re not gonna change the bad impression. ‘Oh, don’t go to Guam. I ride the taxi, smell is no good and they’re overcharging … attitude.’ Who’s gonna lose business? Not only for taxi, everybody will,” he further explains.

Im then developed a model for revolutionizing the taxi service for Guam. He offered Japanese language and customer service classes at his company for incoming taxi drivers, he also developed a policy that gives a discount to riders to eliminate the usage of coins and also a policy that ensures gentle handling of customer luggage.

“But if they just go there and they’re crying, crying, crying. ‘We cannot apply for this one. We cannot do that. This is only for the Miki taxi.’ What do you mean only for Miki taxi? It’s not. It’s for everybody,” he laments.