“It’s an important place. Once they’re here they learn how to run the vehicles and guns and that makes them capable of defending their country,” said Staff Sgt. Henry S. Cruz Jr., Foxtrot squad leader. “They’re doing a lot of training. They got to be certified as gunners, drivers and mechanics.”

The Foxtrot soldiers will spend the last quarter of their deployment in this Kabul facility. They transferred from Kandahar Airfield, site of Foxtrot’s main operating base. They relieved a Headquarters Company team that returned to its Camp Phoenix location.

Guam’s 2nd Lt. Matthew Manglona, Task Force Guam’s officer in charge at Camp Blackhorse, said his group welcomed the new mission. They immediately picked up where their brothers had left off, even adding a small tactical operations center for better command and control. 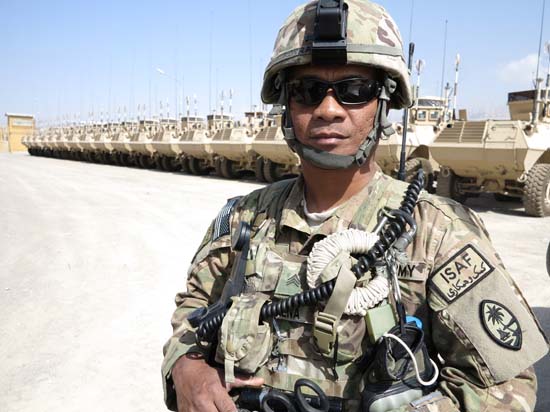 The MSFV is a security vehicle patterned after the U.S. military’s armored security vehicle, according to Robert C. Faille Jr. program manager for Afghanistan’s Operations and Logistics section of Textron Marine and Land Systems, the company contracted to supply the vehicles. The MSFV offers high ballistic protection comparable to a mine resistant ambush protected (MRAP) armored vehicle used by Guam and other coalition forces.

“The Guam soldiers work extremely well with us, without them we wouldn’t be able to do our jobs,” Faille said. “There are many key things to know when operating this vehicle. It’s our job to teach this to the ANA soldiers. We can’t teach them properly without the Guam soldiers. They watch us, keep us safe, and we help them. This all adds up to the overall process of Afghan security taking care of their own country when our forces leave.”

Cruz said his troops are regularly assigned guardian angel missions, and occupy sectors around the camp. Some stay close to their principles, others are situated around vehicles and buildings. Everyone has radios and they maintain constant communication throughout their mission. The Guam soldiers will strategically place tactical vehicles around the compound to aid their overall security. 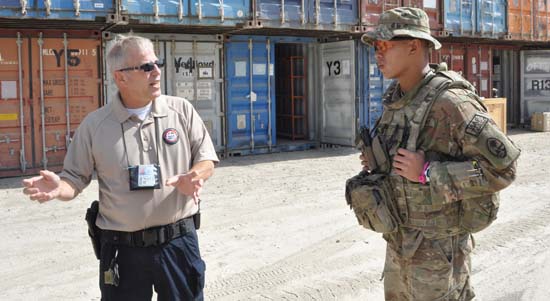 “The biggest thing for us is to not be complacent,” Manglona said. “Everyone knows the mission doesn’t end until everyone comes home.”

“The goal of the school is to have the Afghans all trained to where they’ll be self-sustained,” Faille added.

Alfredo DeJesus, a civilian instructor and MSFV field service technician, stated, “Having the Guam soldiers providing security day in and out is very important. Without their support, we would not be able to perform our duties feeling unsecured.”