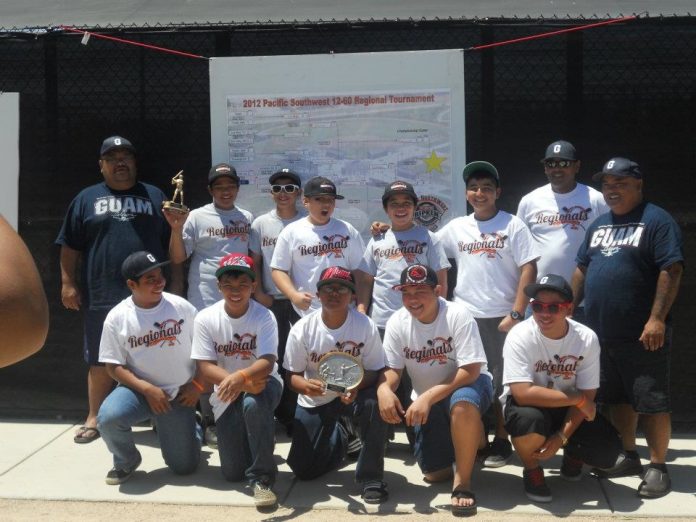 Hagatna, Guam – It was a long journey to Visalia for 12 boys this summer. After weeks of practice, and raising approximately $35,000 in less than two months, our twelve year old Team Guam beat out six of the west coast’s best teams to place 3rd place in this year’s Cal Ripken Pacific Southwest Regional Tournament. This is the Babe Ruth equivalent to Little League’s regional tournament.

The 12 year old team is comprised of players from the Sinajana Giants (Auron Eclavea, Darren Tedtaotao, Josh Duenas, Ethan Dela Cruz, David Eclavea), Agana Heights Cougars (Mike Cruz) Talofofo Rangers (Thomas Perez, Daniel Quenga, Phillip Torre) and the Santa Rita Braves (Vincent Santos, Christian Babauta, Mateo Escalona). In less than two months, they came together as a team and showed what hard work and determination could do. For two of the players, this has been their third consecutive year to show their abilities, for some it was a first. But at the end of their long journey, this twelve year old team will walk away with not only their first win as a Guam Team in three years but has placed 3rd place in the tournament and walks away with Best Sportsmanship. Managed by Tom Aflague, along with coaches Frank Camacho and Mike Cruz, the Team was praised by league officials, parents & spectators that they have never met a team as polite and respectful as Guam has been. “Receiving the sportsmanship award is just as good as winning the tournament”, Aflague says. Team Guam has shown that they are contenders and look forward to coming back next year.

Win or lose we are very proud of all the rest of our teams that went out to represent our island, the 9yr, 10yr & 11yr old divisions. The board members of Guam Cal Ripken would like to thank all the families, friends and business community members who supported our children financially as well as though their support and encouragement, to get as far as they have. Let’s not forget the support from the Guam community in mainland that came out to show their support. But most of all, we’d like to thank the coaches who have volunteered their time selflessly, and the parents who have supported their children throughout the season. This has been one of our most successful seasons ever and we look forward to next year and the expansion of our program.