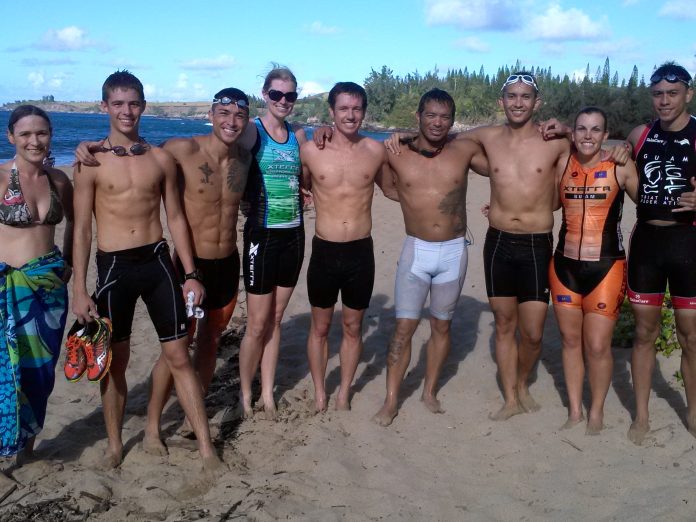 Hagåtña, Guam – The world’s best professional and amateur off-road triathletes arrived in Maui this week to compete in the annual XTERRA World Championship race at the Ritz Karlton in Kapalua.

The qualifying-only invitational off-road triathlon takes the highly conditioned athletes through a 1,500 meter rough water open ocean swim at D.T. Flemming Beach, followed by a 20-mile intense mountain bike course up and down the West Maui Mountains, then finally through a 6-mile trail run in and around the trails of Kapalua.

Thanks to the support from the Guam Visitor’s Bureau and efforts of XTERRA Guam race director Eric Tydingco, the XTERRA Guam race has been a World Championship Qualifying race the past 2 years, continuing through 2014.

As a result, top age-group finishers in their respective divisions have won a coveted slot into the XTERRA World Championship race held annually in Maui.

This year, between Guam and Saipan, 17-athletes will be representing the region at the World Championship race.

This year’s championship race course has seen additional mileage added to the mountain bike course, creating an even more difficult endurance event than many of the triathletes had anticipated.

“The race is going to be a test of patience, if you’re on your bike and riding – it’s hard enough,” said XTERRA off-road triathlon series champion Josiah Middaugh.Middaugh was the first American to capture the series title since 2000 when USA’s Michael Tobin won the tour.

This year’s championship looks to be a tight race for many of the professionals. Australia’s Ben Allen and South Africa’s Dan Hugo, who finished 1, 2 at the last XTERRA Guam championship qualifier race, are both in fine form and look to challenge favorites such as Middaugh, last year’s second place finisher, for the top pro prize purse.

One the women’s professional side, Scotland’s Lesley Patterson has been unstoppable on the tour, but veterans pros like USA’s Shonny Vanlandingham, Great Britain’s Jaqui Slack and Guam’s own Mieko Carey aren’t going to take it easy on her.

The race will be Sunday at 9AM, Hawaii time (5am, Monday in Guam).