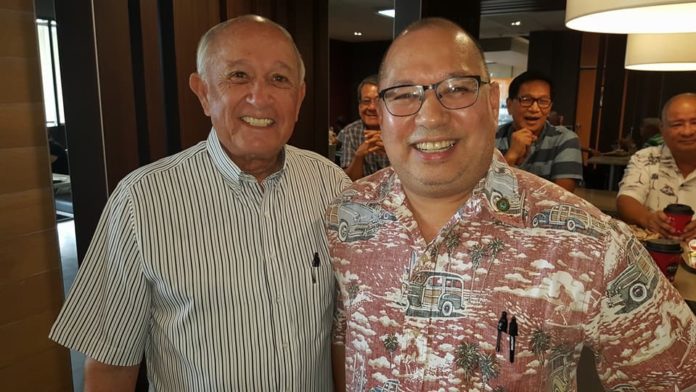 Guam – Former Governor Carl Gutierrez and former Chief of Police Fred Bordallo have announced that they will be running for governor and lt. governor respectively. They made the announcement today (Weds.) at McDonald’s in Tamuning.

Bordallo said Gutierrez told him he was always on the short list of candidates.

“He was always assuring me throughout the months that it looks good with me that some people are expressing an interest that ‘Hey Fred has a lot of law enforcement, public safety, his family are from different sectors, my brother is an electrician, my other brother was in avionics, my sister is a doctor my other sister I have some teachers and my wife is a teacher.’ So, you know and I’m a veteran too in the military you know. So those were just some of the good points that I think strategically would increase our odds of winning if we teamed up together,” said Bordallo.

Bordallo said after hearing from Gutierrez and his supporters today he officially accepted the offer to be his running mate. Before selecting Bordallo however, Gutierrez was in talks with Senator Dennis Rodriguez Jr.  Rodriguez himself confirmed this last year. But Rodriguez announced last week he would be running for Governor—but not with Gutierrez. Rodriguez has yet to announce his running mate.

Now in addition to Senator Rodriguez there are three full Democrat teams who have announced intentions to run in the gubernatorial race.  The first team to form was Lou Leon Guerrero and Josh Tenorio, followed by Senator Frank Aguon Jr. and former Attorney General and U.S. Attorney Alicia Limtiaco. Today (Weds.), Carl Gutierrez and Fred Bordallo joined the fray.

“We believe the greatest thing about democracy is having that choice in elections. And the Democratic party you know for the Democrats for Guam our party is the party of inclusion. We open up to everyone whether you’re Republican or Independent but we also have this record of always producing a lot of the candidates for legislature. We always have a whole slate of candidates and now even the gubernatorial,” said Bordallo.

Considering the number of candidates running and how he fared in the last gubernatorial election there has been rumors that Gutierrez may not necessarily be running to win.

“You reach out and ask people for support for financial support you never want to let them down. That is a sort of gesture that they believe in your message they believe in your commitment. The people who are right now stepping up right now and have made some commitments to finance Governor Gutierrez, I’m amazed because you don’t do that without first trusting that he’s in it to win it.”

Bordallo says his focus as Lt. Governor not just on public safety as a former chief of police, but also overall homeland security.