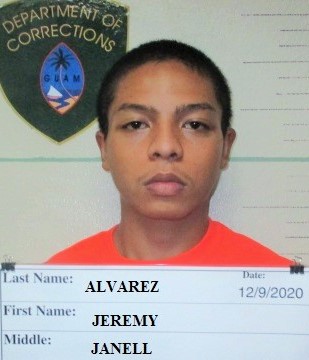 The 19-year-old who allegedly attempted to murder an elderly woman on Tuesday told police that he did so because she “touched” him.

Jeremy Janell Alvarez resides in the same Sinajana residence as the victim, a 77-year-old woman. Police reports indicate that the elderly woman was struck five to ten times with a hammer on the back of her head.

Alvarez confessed to police hours after the incident occurred, self-surrendering to authorities at the Central Precinct Command kneeling and in tears telling police “she broke my heart… she messed with the wrong guy.”

Police say that Alvarez went to the elderly woman’s bedroom to ask for Xanax and that was when Alvarez claims she touched his genitals.

Court documents state, “He said it made him angry and he hit her with the hammer that was in her room. She had been kneeling down facing away from him when he hit her. She fell after the first hit, but continued to hit her ‘five to ten times’ more because he just ‘felt like he has to…keep going.'”

After the incident, Alvarez left the elderly woman bloodied and on the floor. When she was discovered by other residents, Alvarez had moved on with his day, picking up trash outside the home.

A bloodied shirt, shorts, and shins were confiscated by police. Alvarez was booked and confined on charges of attempted murder, and aggravated assault both with the special allegation of use and possession of a deadly weapon in the commission of a felony.