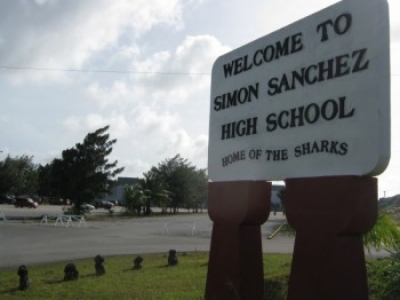 Guam – Three teens are in detention after they broke into 13 classrooms at Simon Sanchez high school.

The home of the Sharks was already in desperate need of repair when two 14-year olds and a 16-year old broke into the school causing “extensive damage to school property.

Police say video footage of the crime was used by agents from the Juvenile Investigation Section as well as Simon Sanchez High School to solve the case.

Tapao says “all three minors were charged for the following: Burglary; Theft; Conspiracy; Criminal Mischief; Graffiti; Crimes Against the Community; Jurisdiction Over an Adult and Beyond Control.  All three boys were confined at the Department of Youth Affairs.  This case has been forwarded to the Office of the Attorney General for prosecution.”
The Guam Police Department would like to remind the community to take an active stance against crime in the community by joining an active neighborhood watch group or help by forming a watch group in your village.