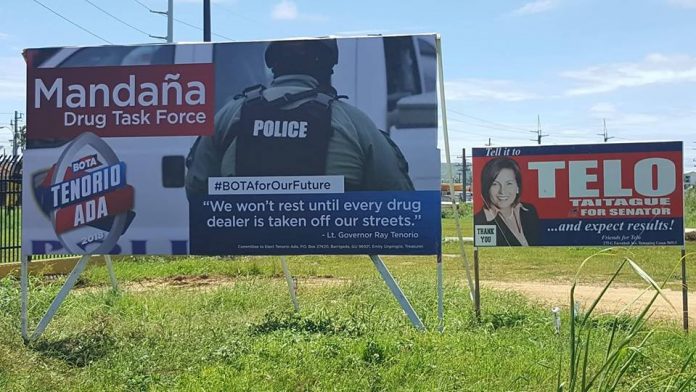 Gubernatorial candidate and lieutenant governor Ray Tenorio found his campaign in violation of copyright today. His organization says the infringement was inadvertent and is taking swift, corrective action.

Guam – By eight o’clock this morning, BOTA’s “Mandana Drug Task Force” campaign sign by the Tiyan sports field in Barrigada was still up after rumors circulated Monday that the photo of the cop on that billboard and another in Agat is a copyrighted image belonging to the Pacific Daily News and that the signs would have to come down.

Before 11:30 a.m., PDN was confirming to PNC today that not only is the image copyright-protected, but that no permission had been granted to Tenorio-Ada’s BOTA gubernatorial campaign for its use, and that the Gannett-owned newspaper had indeed asked the campaign to remove the signs.

Before 2:00 p.m., BOTA was announcing the sudden take-down of the vinyl banners covering the signboards, issuing the following statement:

The photograph in question was incorrectly used. Although the banner was designed in March, the photo used was for placement only. When it went to production, the wrong photo was used. We sincerely apologize for the error.

We would like to apologize to the Pacific Daily News for this error on our part; we meant no disrespect. We thank the news media for taking such a keen interest in the marketing component of our campaign; we would have it no other way.

All banners using the photo will be removed immediately.

As Pacific News Center has reported, the placement of the signs on roadsides in Agat and Barrigada originally came under fire for use of the image of a uniformed police officer and a marked police vehicle when (A) local personnel law prohibits sworn police officers from actively participating in political campaigns and (B) candidate for governor on the Tenorio-Ada ticket, Ray Tenorio, remains the current lieutenant governor in charge of all public safety on island, even though he stands accused in Superior Court documents of drunkenly attempting to swipe a police sergeant’s holstered handgun six times, then finally grabbing the loaded weapon and waving it around at a crowded event.

“I just want to thank the Chief of Police and all of the officers who are here who are going to be part of this task force, to continue to drive the message home that crime is not going to be tolerated,” Lt. Gov. Tenorio told those gathered at Adelup for a “Mandana Task Force 2.0” press conference last  Friday. “We will come after you. We will apprehend you. So please, find another course.”

Torres said his own arrest on drug charges in April was politically motivated, but Tenorio has flatly denied that.

The concern among political observers is that the lieutenant governor may be using his authority over Mandana as a bully pulpit to instill the impression that local police back him. Nevertheless, elected officials are exempt from GovGuam personnel rules barring public employees from using their “official authority or influence for the purpose of interfering with or affecting the result of an election.”

Last Friday Governor Calvo dressed down a news reporter for asking whether Adelup’s press conference had been called that day as a matter of political timing to deflect attention from the criminal misdemeanor charges filed against the lieutenant governor that very week.

“How dare you ask that question!” Calvo retorted. “If you think this is politicized, you don’t know me as a governor.”

Yet, nevertheless, up went the controversial Mandana signs over the ensuing weekend, anyway.

In response to lingering media questions about the timing of the installation of the signs, the Tenorio-Ada campaign issued the following statement late last night.

“There have been concerns expressed about the timing of our Mandana Task Force billboard signs. Please note that these billboard designs were designed in March of this year; produced in August and released post primary as was our strategy from the beginning of our campaign. Any concerns with the timing are purely the notions of political operatives from our opposition.”

“Crime is on the rise and we do not feel safe, even in our own homes,” Josh Tenorio is seen saying among images of officers and squad cars in a campaign television ad from earlier this election season. “A Leon Guerrero-Tenorio Administration will make public safety a top priority by hiring enough police officers for our roads and in our villages.”

While the appropriateness of ever featuring uniformed police officers in campaign ads remains in doubt, the difference is that one campaign appears to be using its authority over public safety as a platform proclaiming relentless determination and success, when its main candidate’s credibility on actual safety has suffered under a penchant for acting before thinking.