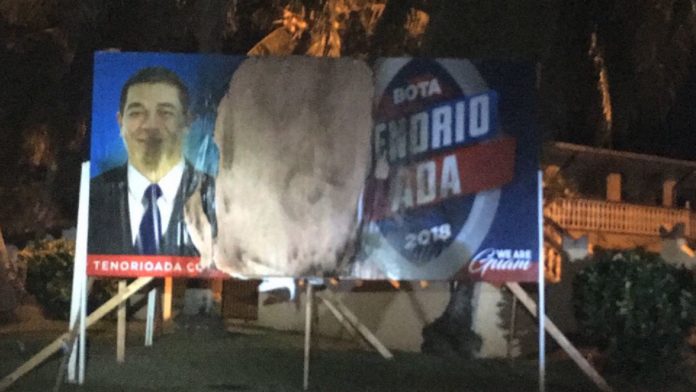 Guam-A Tenorio/Ada sign was torched early this morning specifically on the part of the sign that has a picture of gubernatorial candidate and current Lt. Governor Ray Tenorio.

According to a release from the Tenorio/Ada or BOTA campaign, at around 5am this morning(Thursday) “a Tenorio Ada supporter woke to his wife’s screams”. The wife saw someone in a blue car “torching the political sign on their yard.” The BOTA campaign says her screaming must’ve scared them off. The reason for the vandalism is unclear; however, the BOTA campaign is assuming that it could be tied to the election as they wrote in their release “it’s ratcheting up to be a tough election season, but that’s no reason to trespass, vandalize personal property and frighten families.”

The Tenorio/Ada campaign says this is not an isolated incident as other signs in other areas around the island have been damaged. Campaign Spokeswoman Tina Blaz says, “even as the campaign climate heats up, we will continue to run this campaign based on respect for our people and our community.” GPD was notified of the vandalism and a report was filed.