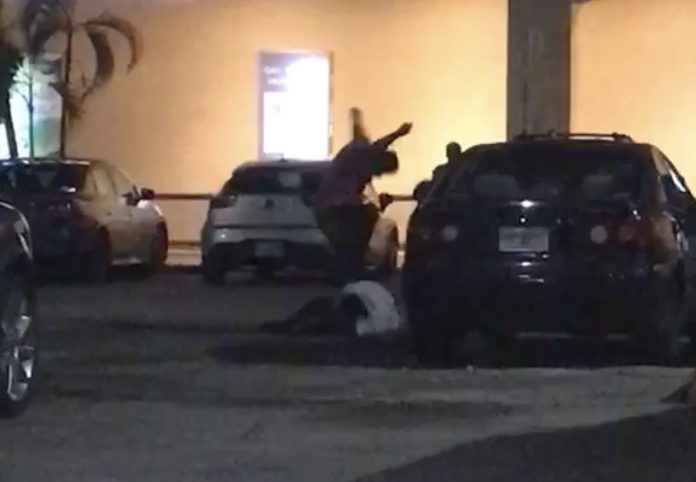 Guam – Is the power of social media blowing up isolated incidents of violence occurring on the island, or is Guam actually facing increasing violence in the community? While the answer remains up for debate, high level GovGuam officials and FSM organizations believe social media plays a big part in that perception.

This week, three videos of altercations caught on camera were shared on social media, taking the community by storm.

PNC has since received two more videos of what appears to be rioting on the island. The first video takes place in the parking lot of the Agana Shopping center. Several men and women can be seen scuffling as others attempt to break up the fight. At one point in the video, one of the men is football kicked in the head. The fight is caught on camera by a woman filming the riot from her vehicle.

In the second video, a group of men are seen attacking another man who is sitting outside a laundromat in Dededo. While it appears that others are trying to break up the attack, the man sitting on the bench is kicked in the head by a man wearing a white shirt. The man being attacked retreats into the laundromat but his attackers follow him inside, continuing their assault.

These videos have indeed enticed a reaction from the community as many island residents took to social media to share their growing concern about violence in the community. But Guam Police Department Chief J.I. Cruz believes social media can be a double-edged sword.

“It’s great that we have social media and we have smart phones and captures these things very readily but at the same time when someone is capturing these things on social media and yet not calling 911, that, I think, is problematic. And social media just adds to the problem versus being part of the solution. When talking about the Agana Shopping Center case, nobody called 911. My officers went out there but yet because it’s on video we are cracking that case. We have already–potentially involved in that,” noted Cruz.

“Rather than just being the amateur videographer and posting, be that good citizen and call 911,” Cruz implores, adding that what the island is seeing is videos being taken but not being reported.

“The sensationalization of these particular incidences [sic] because of social media, because of an application at a person’s fingertips. The laundromat incident, again, was another case. It was after the fact. We got there, nobody called us and then when we got there people didn’t even want to–we had to be their reporting persons for that particular case. Even the victim didn’t want to get involved in that, but nonetheless we are still, we took a complaint and are dealing with that. We will hold people accountable,” said Cruz.

Along with the sharing of social media, the community has offered their fair share of responses and in many cases are pointing fingers toward a specific ethnic group.

“We recognize that there is a particular ethnicity within our community of Guam that are involved more heavily in crime and my response to that is we need to do more outreach with these folks to find out really what is the problem to prevent that from happening,” Cruz noted.

Department of Corrections Director Tony Lamorena, however, says that the crime is not ethnically specific, and those incarcerated at the Prison facility come from all walks of life and all ethnic backgrounds.

The gathering of minds today was focused on finding a solution to the spike in crime that the island is seeing.

“Number one, and this is true of any event, before you get on the video, get on 911. If it’s enough for you to be able to video it, it’s probably enough to justify calling the police department or directing someone else to do so. Because it’s more important to get the emergency responders, medics, police officers, or whatever type of services to the site where you’re seeing this video. If this video is warranted in your eyes, so should emergency responders,” said Lt. Gov. Ray Tenorio. “The second thing we talked about is every individual who is going to be judged on their actions, whether you’re a U.S. citizen or any other citizen. So we don’t want to unfairly generalize or stereotype any particular ethnicity because of what they do. Every individual will be judged on his or her own conduct.”

Tenorio says the also agreed information and education about the laws of Guam need to be readily available so that there are no clashes in cultural differences and that families need to be active in stemming violence.