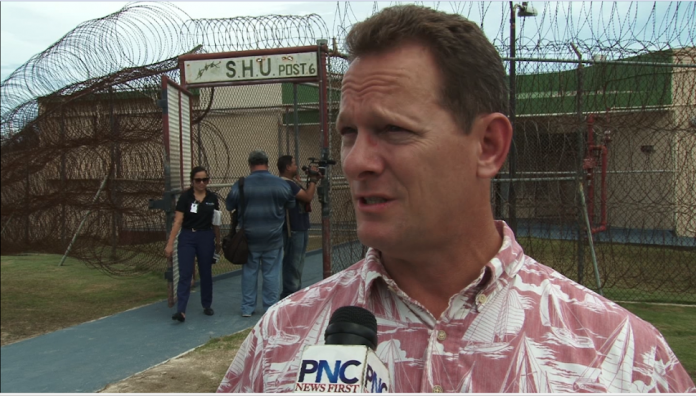 Guam – Dept. of Corrections Director Tony Lamorena praised Lt. Governor Ray Tenorio on Thursday for taking the bull by the horns and leading the charge to complete the process of upgrading a block of deteriorated detainee housing at the main prison facility in Mangilao. The multimillion-dollar project completion is a coordinated effort among various government agencies and is in compliance with a federal consent decree and settle agreement.

“This is a success for the entire government of Guam. Thank you very much,” Tenorio told those gathered. The Lt. Governor’s pronouncement was followed by hearty applause.

Project partners are elated with the results. Detention center Posts No. 6, 7, and 17 have been upgraded at a cost of $2.7 million, according to Corrections Dept. Capt. Anton Aguon. The improvements are now complete, after well-known health, safety, security, and perennial overcrowding concerns forced the department to do something about it. Frontline and center in the intragovernmental effort has been replacement of the housing cells’ worn-out locking mechanisms with a state-of-the-art security system.

“We’re very satisfied,” District Court Chief Justice Frances Tydingco-Gatewood said. “We had already ended the consent decree –[this is the culmination of] the settlement agreement, actually—several months ago and that was before all this was completed, and it was the result of a field trip that I had with Director Lamorena. They had already [begun] the process of implementing the secured system.”

“If you notice, when you go out, all of the buildings have been repainted, so you know, although it’s an older facility, we continue to work with what budget we have to better improve it for everybody,” Lamorena said.

Tenorio, too, is grateful for the outcome, but said this is just the beginning of new things to come at the adult correctional facility.

“I think we achieved what we set out to do—of course, making sure the Dept. of Justice and all of the federal entities were happy,” Tenorio said. “Of course, we’re out from under a 25-year decree—which no one else has been able to achieve—and these are the successes of not just of the Attorney General’s Office, DOC, UOG, this is really government helping government.

“And we have to get contractors to do the work. We have to get the best practices and the best equipment, which you saw inside there. But this is something we need to also emulate in other housing units throughout the facility going into the future, because you’re gonna have those other locking mechanisms…break down, and we need to make sure that the inmates and detainees here are safe and they’re getting civil rights protections like they all should.”