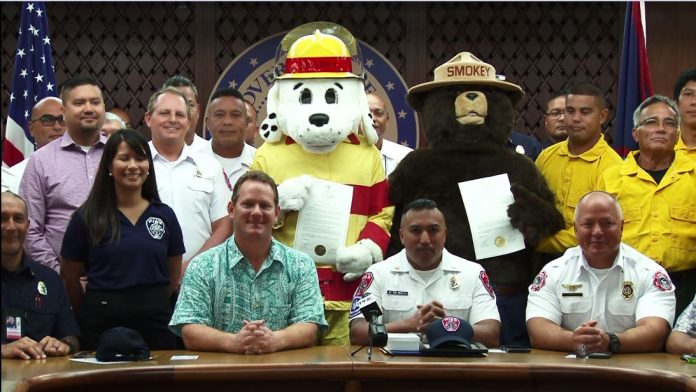 It’s Fire Prevention Week, a time when the island’s various firefighting units and prevention stakeholders call attention to the critical roles first responders play in rescue operations and in keeping the flames at bay.  PNC caught all the action during a proclamation ceremony inside Adelup last Friday.

Guam – Fire Prevention Week is being observed from Oct. 8 through 13 on island. This year, the Calvo Tenorio Administration is celebrating the teamwork and cooperation of a litany of organizations focused on the island’s safety and protection, with the full complement of the tools they need to do their jobs.

These several firefighting and fire-prevention teams are coming together as one to uphold a mission of unity:

“Of course I’d like to acknowledge the presence of our lieutenant governor, the Honorable Ray Tenorio,” announced Adelup Special Assistant Julius Caesar Santos at the outset of the proclamation signing. Tenorio is Gov. Eddie Calvo’s handpicked public safety chairman on Guam.

“Good morning, everybody,” Lt. Gov. Tenorio said to all gathered. “I have to tell you it’s been a long and arduous journey this last eight years and the eight years prior to that working on public safety to build a team that includes everybody. It breaks down the silos and the walls that divide us [to] be able to join us [together] as a group.”

As a practical matter for civilians, the Office of the Governor and GFD are urging families to do their part by developing a home fire escape plan with all members of the household and to practice it twice a year. Acting Fire Chief Joey San Nicolas advises residents to look, listen, and learn.

“Look for all the fire hazards, listen for that fire alarm, because you only have a few minutes to get out, and learn two ways out of your house or any location that you’re in,” he said.

And rest assured that the whole fire response apparatus stands ready, willing, and able to spring into action if anything should go wrong.

“We’ve garnered the fire trucks and the ambulances, the hazmats…and the evolution of our agencies to be able to work in tandem with the military and our counterparts in the autonomous and line agencies,” Tenorio said. “We’ve broken down this ‘us and them’ mentality. It’s only us—and all of us!

“We’ve been stronger in these last eight years than we’ve ever been before. Every single fire station has a fire engine—and that hasn’t happened for a long time.” Reflecting on the island’s shiny red new ambulances, Tenorio mentioned the poor condition of Guam’s ambulance fleet when the Calvo Tenorio Administration first took office in 2011.

At the proclamation signing ceremony, Tenorio presented Deputy Fire Chief San Nicolas with a special commendation for his outstanding contributions to GFD and for his role as president of the Western Pacific Islands Association of Fire Chiefs.

Tenorio lauded the interdisciplinary fire and rescue force for its collaboration with the CNMI as well as its teamwork right here on island.

“We had a great experience working with the Navy and the Air Force and all of our friends from across the region. The achievements we’ve had—not just recruits—but in raising standards, it’s been second to none.

“Congratulations, everybody. Thank you very much.”