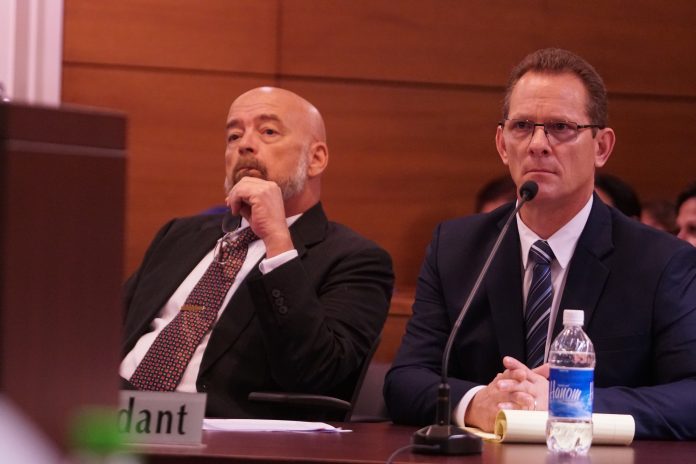 Former Lt. Gov. Ray Tenorio has been exonerated from all charges related to the gun-grabbing incident in July last year.

After deliberating on Thursday afternoon, the jury returned a not guilty verdict on Friday, clearing Tenorio of two misdemeanor charges—  reckless conduct and obstructing government functions.

Prior to the jury’s verdict, the court dismissed two other charges for lack of supporting evidence.

Tenorio’s supporters, who filled the courtroom, were jubilant over the jury’s verdict, which, however, drew mixed reactions from the community.

“I presented the best case that I know how to, I thought the presentation of the case was good and the closing I thought I did a good job with the closing but the jury found him not guilty,”  prosecutor Basil O’Mallan told reporters.

The case stemmed from an incident on July 7, 2018 in which Tenorio was reported to have grabbed a weapon from Sgt. Carl Cruz.

“At least, he’s already been found guilty in the court of opinion. Let me know when someone else does it. You all just set a very dangerous precedent,” one commenter said.  Another one wrote, “It’s water under the bridge,”

Another commenter wrote: “So disappointed he broke the law and is walking free. Wow, sad day. Pray no other person tries to do what he got away with and an officer gets hurt or someone else. Please stop calling him a lt. governor he’s not one anymore at least that’s something good for Guam. To the police officers on Guam sorry they felt he didn’t show total disrespect to you all and the law.”

Tenorio’s attorney Tom Fisher said, the jurors “got it right.”

“Yes, the system works. It works; it’s not perfect— none of us are and the system is made of people and people get it right. They got it right this time.”

And while the defense is celebrating, the government  issued a stern warning to the community.

“Do not pull an officer’s gun period. Don’t mess with it. It’s very dangerous. Anyone can get hurt in that situation and if someone does that we will prosecute them. Despite this verdict I will prosecute those cases, O’ Mallan said.

The Attorney General’s Office is not appealing the jury’s verdict.

What’s next for Tenorio?

“We’ll let God open that door and we will figure it out from there,” he told reporters. “To the people of Guam thank your understanding and prayers. To everyone else let’s move forward.”

In a statement released after the verdict, O’Mallan said, “Though the jury found that Mr. Tenorio’s handling of the officer’s weapon did not break the law, this case has raised concerns about whether it should be illegal to interfere with a police officer’s weapon.”

The gun-grabbing incident prompted the Legislature to pass a law that makes it a felony to disarm a police officer.

“Though common sense would dictate that an officer’s gun should be off limits,” the AGO said, “sometimes common sense does not align with the law. This incident allowed the Legislature to take a look at an area of law that needed improvement.”