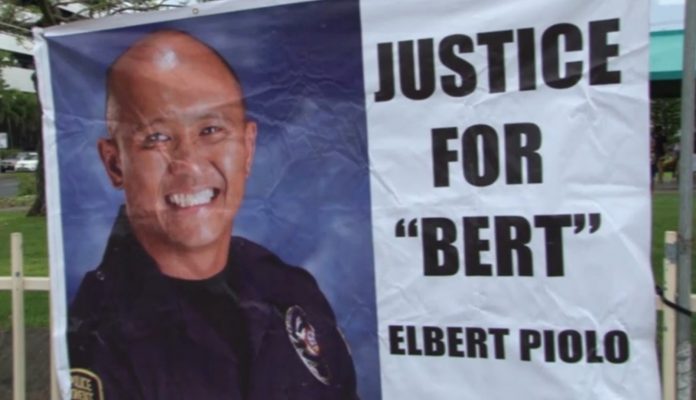 “I was not intoxicated.”

Part two of Pacific News Center’s interview with Lt. Governor Ray Tenorio examines what might have caused him to grab a gun from a policeman’s holster, and asks why Tenorio ignored the danger in light of his own experiences with law enforcement. It’s a situation that raises a life-and-death question about the point at which a drinking person becomes too judgment-impaired to handle a firearm.

Guam – At what point do guns and booze become a bad idea? PNC asked lieutenant governor and former police officer Ray Tenorio that question several times in his office on Wednesday, following revelations that he had been drinking when he unholstered a cop’s gun at the Annual Barbecue Block Party in Tumon last weekend. He insisted, after repeated questions about his consumption, that he drank only two or three beers over a four-hour period.

PNC: “OK. There are rumors out there that you had as many as ten. That’s not true?”

TENORIO: “I’m sorry. I had about two or three. People giving me beers I don’t finish up, I put ‘em down, somebody else gives me another one, but I had two or three beers over the course of the night.”

But not only does Tenorio insist he wasn’t drunk, he would not admit that ‘liquor plus loaded’ is a dangerous blend.

PNC: “Would you agree that alcohol and firearms are a bad mix?”

TENORIO:  “You know, I apologize for what happened that night. I take full responsibility, but I was not intoxicated.”

PNC: “But, Lt. Governor, would you agree that alcohol and firearms are a bad mix?”

TENORIO: “Look, I was not intoxicated. I had a couple beers that night, for sure, but I was not intoxicated, and it was a safety concern for me. And if any other person had taken that firearm who had other intentions, my intention was purely to make sure the safety of the officer and the public…I take full responsibility for what happened and I apologized to the officer for it…and immediately gave it back to him after removing it from the holster.”

Tenorio’s reticence to discuss the volatility of handling clipped weapons while imbibing alcohol follows a tragedy that struck close to home. Tenorio lost his friend and driver to the lethal mix of a loaded handgun and uncontrollable drunkenness.

After a night of clubbing and drinking three years ago, police officer Mark Torre, Jr.’s pistol discharged into fellow officer Elbert Piolo’s underarm and into his chest after Piolo pulled up to drop Torre home. Torre lost his badge and earned an eight-year sentence for negligent homicide. Piolo lost his life and earned a posthumous promotion to sergeant.

Piolo had been Tenorio’s executive detail security driver, but the lieutenant governor draws no comparison between that tragedy and the danger of his own gun grab.

“But the situation was very different,” Tenorio said.  “I hope this doesn’t conjure up the memories of that tragedy. He was a friend.”

But, as PNC reported Wednesday, a former staffer of the Calvo Tenorio Administration, Troy Torres, had filed a police complaint stating that Tenorio was “clearly inebriated” and “visibly intoxicated” at Saturday night’s block party, while laying out a laundry list of charges stemming from the lieutenant governor’s police gun-grabbing incident.

If Tenorio was drunk, the threat levels of the two situations may be more parallel than the lieutenant governor can bring himself to acknowledge, and he may be lucky to be alive.

“In hindsight, this teaching moment was mine,” Tenorio said Wednesday.

If any lesson has been learned, perhaps it’s this: never touch a police officer’s gun, regardless of who you are, no matter how much or how little you’ve had to drink. And know that doing so could soon be a felony. Sen. Telena Nelson (D), oversight Chair of the Public Safety Committee, is pursuing legislation to codify it.

“Our public safety officers, they have a responsibility to the public, and when someone—it doesn’t matter who—no matter the individual, they have the right to enforce the law. So if someone tries to grab for your sidearm or disarm an officer, there’s due cause to take the individual down,” Nelson said to Newstalk K57 midmorning radio host Andrea Pellacani on Wednesday. “And it doesn’t matter who you are or what position you hold.”

“We wrote a bill to ensure [that] if anyone…tries to seize a firearm from a police officer or any public safety officer [that it] be recognized as a felony, and so legal is reviewing that right now,” the senator said.