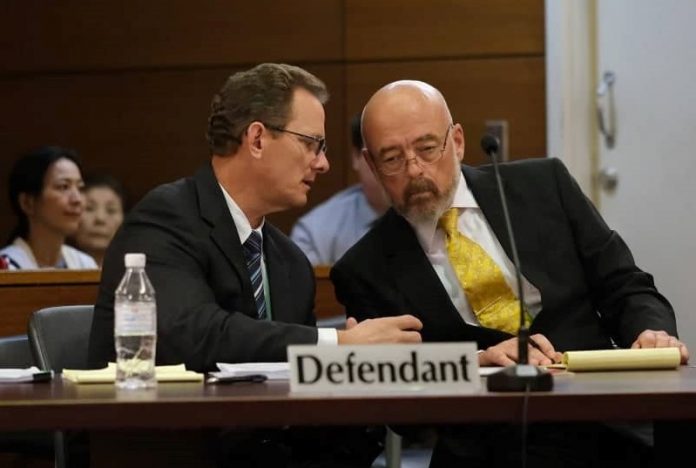 The trial of former lieutenant governor Ray Tenorio began with a bang on Friday as the prosecution called  police officer Sgt. Carl Cruz, whose gun was grabbed by Tenorio during a BBQ Block Party in Tumon in July last year. Cruz has been serving the Guam Police Department for 21 years.

The trial began shortly after the jury selection process was completed.

Wasting no time, the prosecution had  Cruz demonstrate how his gun was holstered and what he did when Tenorio went for his gun.

According to Cruz, he was standing near his vehicle, leaning on the hood and, along with Officer Chang, observing a tourist couple. It was around this time when Tenorio approached him from behind and grabbed his gun.

The prosecution had Cruz re-enact the events.

During the re-enactment, Cruz demonstrated how he reacted when he felt someone touch his gun. Cruz identified who it was he saw. He dropped posture at the same time he continued to follow around both hands and, he turning as well, both hands on weapon tugging down with force as he pulled it out. As this happened, they stood face to face.

At this point in the testimony, Tenorio’s attorney Tom Fisher objected to the demonstration, particularly, to how the person portraying the former lt governor was holding the gun.

The objection was sustained. Superior Court Judge Benjamin Sison ordered the jury to disregard the scene showing how the gun was being held.

With that out of the way, Cruz continued to testify, quoting the then lt. governor, “Too easy, too easy. Let’s do that again.” Cruz said the lt gov attempted to go for his gun again.

Fisher, in his opening statements, pointed out that Cruz was Tenorio’s subordinate as then governor Eddie Baza Calvo delegated the lt. governor the authority as the czar of public safety.

Fisher further pointed out that Tenorio wasn’t attempting to steal the duty weapon, but rather, was teaching the officer a lesson on being careful with his weapon, and how to handle and secure it.

“Once a teacher always a teacher,” Fisher said, referencing Tenorio’s years on the force as an instructor.

The government pointed out that GPD officer’s guns are hot— meaning they are loaded and ready to be fired upon drawing it from the holster.

Trial resumes at 9 a.m. on Monday.