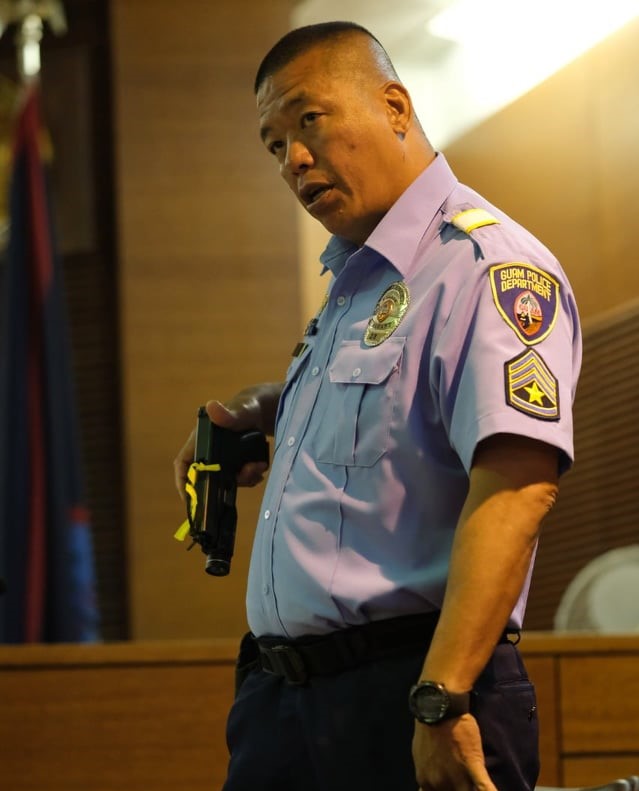 Guam – “It’s that easy. Too easy. You know, I’m the public safety chairman.” These were the words of former Lt. Gov. Ray Tenorio directed at Police Sgt. Carl Cruz during the gun-grabbing episode at a BBQ Block Party in July last year.

Four of the five witnesses who took the stand at the continuation of Tenorio’s trial confirmed that the incident took place.

Throughout the tension-filled proceedings in court, hypothetical questions were posed to Cruz, who was at the witness stand.

Despite defense attorney Tom Fisher’s argument that that point was irrelevant, Cruz said he would have taken appropriate action. “If it had been anyone, [I would have] most likely detained the individual for the investigation and transported him to the nearest precinct.”

At the time of the incident, however, Tenorio was not arrested. While the incident was reported, no legal action was taken against Tenorio until a report was filed by former Calvo Communications Director Troy Torres.

Picking up where the court left off,  Tenorio’s trial began with a rundown of the rank structure within the Guam Police Department, in an apparent attempt to establish Cruz’s position as Tenorio’s subordinate.

During last week’s opening statements, Fisher presented Tenorio as as the czar of public safety. The defense then moved on to establish the former lieutenant governor’s intent. Tenorio previously called it a “teachable moment.”

“You have the authority to inspect and correct junior officers there. Did anyone inspect you? No, none at that time. Nobody did okay,” Fisher said. “You testified you believed a side arm should be properly secured. Yet at the time the lt. governor was able to take your firearm. That is correct.”

On the stand Cruz testified that after taking his weapon, Tenorio repeatedly said, “Too easy, too easy. Let’s do that again.” And just when Cruz was demonstrating the inability to remove a holstered gun from the holster he wore the night of July 7, 2018, there was an alleged “click.”

“The stock of your firearm and pull it straight up and so the gun will not come up at that point. I have to object, your honor, Mr. Omallen mischaracterized the evidence that was just presented the gun did in fact come out of the holster. Can we see that officer,” Fisher said.

Fisher was quick to point this out but when asked to again demonstrate, there was no click.

This raised the question as how will this moment in the trial weigh on the jury?

While that remains unseen, focus continued on the demonstration of the events leading to the gun grabbing.

In one instance, Fisher moved to establish no harm would have been done, pointing out that Tenorio did not take the gun with the intent of stealing or using it.

Tensions rose yet again when O’Mallen questioned Tenorio’s executive assistant, Anthony Lujan, about whether or not the former lieutenant governor was drinking alcohol.

While Lujan confirmed that Tenorio did drink beer that night, the introduction of potential 404B character evidence did not sit well with the defense, arguing that “evidence of a person’s character or character trait is not admissible to prove that on a particular occasion the person acted in accordance with the character or trait.”

Fisher quickly re-directed stating, “You are not saying that the lt. gov was intoxicated, in fact he was not intoxicated.” To which Lujan agreed.

The trial continues tomorrow at 9 a.m.