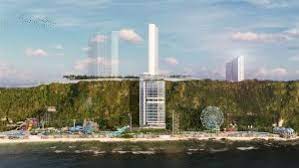 PNC’s Devin Eligio has the update on the Vista Del Mar.

Despite the backlash the project has received from environmental and cultural advocacy groups, the behemoth project was approved by the Guam Hybrid Land Use Commission.

Since the inception of the Vista Del Mar’s development in Guam, the resort has received backlash for the cultural and environmental damages the project could potentially cause.

Nicole DeLisle-Duenas, Prutehi Litekyan Member stated, “This mega-development still rises up significantly from the plateau as we see in the exhibits absolutely altering the iconic historic and traditional landscape of the cliff.”

Jesse Chargualaf spoke on behalf of Senator Sabina Perez to express her concern over some of the environmental effects of the project.

Jesse Chargualaf, Senator Sabina Perez Representative stated, “The natural limestone forest on the site are essential to providing habitat for endemic and endangered species which also a part of our natural and cultural heritage.”

In the impact assessment provided by the ARC Environmental Services, there is a potential loss of 18 threatened cycads and 1 endangered eugenia bryanii on the plateau level.

The approval of the development by the Guam Hybrid Land Use Commission was met with words by Save Southern Guam’s Lasia Casil, who claimed that the GLUC had approved irresponsible developments in the past.

The GLUC has received 213 letters in opposition to the development. In addition, an online petition garnered 2,587 signatures against the project.

Prutehi Litekyan Founder Monaeka Flores delivered a sure-fire statement, assuring that they will stay resilient and persist through what many call, “an irresponsible development.”

Monaeka Flores, Prutehi Litekyan Founder stated, “Whether it’s the US Military or a multi-million dollar development, we will come up and we will rise up over irresponsible development.”

With the approval of the tentative development, the Vista Del Mar is set to enter the permitting stage of the project.