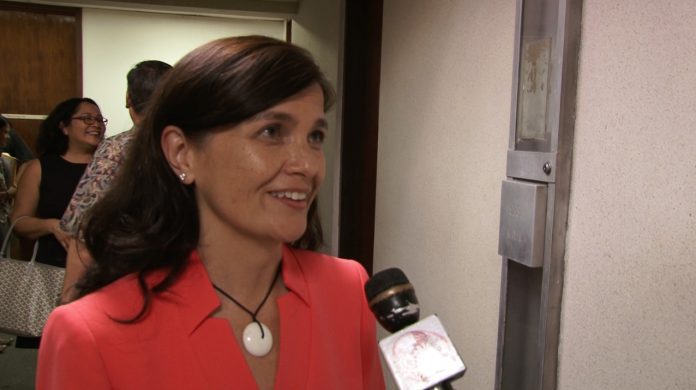 Guam – Acting Speaker Therese Terlaje (D) has called session for Wednesday, Nov. 28, and if her ecological compliance wishes come true, the conscientious men and women of the Guam Environmental Protection Agency will have a mandate to boast about. And residents could have a little more to be grateful for this holiday season.

Clear water, green lands, and fresh air are always high on the list of Guam’s natural assets, and Terlaje aims to keep them that way.

The Acting Speaker invited PNC to the table about a week and a half ago as she gathered with staff to discuss pending legislation that would require the hardworking team at the Guam Environmental Protection Agency to start tooting their horns a little louder.

“The Air Pollution Control Act, the Guam Pesticides Act, the Solid Waste Act: all these mandates they have…they will put up on their website,” Terlaje said while ticking off a litany of laws. The full list of enforcement and compliance mandates is complex enough without forcing Guam EPA to cite and explain them every time an elected official, news organization, or John Q. Citizen has a question about a particular case of violation.

“When they get these FOIA requests, it takes a lot of manpower to get that information together,” Charissa Manibusan said. Manibusan is a policy analyst with Sen. Terlaje’s office.

“In trying to stay in front of it, so that they can avoid those kind of things, I think that they’re going to be proactive in putting it up on their website,” Manibusan added.

Mandating timely publication would also compel continuity through attrition and the hand-off from one administration to the next.

“And [we’re] putting in a statute, [so] whoever the next person is that is running their agency will still have to deal with [the changes],” Committee Director Jocelyn de Guia said. Terlaje chairs the Committee on Culture and Justice.

“I love the people in EPA. I think most of them have been working there all of their careers, and so they’re very dedicated to it, and so I kinda wanna brag about them to the public about how diligent they are about these violations,” Terlaje said.

“I just decided that maybe it would help EPA if we all could follow along. So I want to require them to put their notices of violation on their website so we will know that this oil spill occurred. We will know everything. Everyone’s talking about illegal dumping, but they are very diligent.”

Diligent about enforcement, yes. But Terlaje says the legislature typically hears about environmental violations only months after they’ve occurred and well after nonconforming practices are brought into compliance by Guam EPA.

The acting speaker is calling for the timely publication of all GEPA reports so any self-styled watchdog, planner, or stakeholder can track developments immediately, from notices of violation through settlement agreements and other corrective actions “so that the public can decide whether these people are doing a good job or not, and I think in most cases they’re actually…doing a good job,” Terlaje said.

Furthermore, all voluntary compliance agreements would be subject to the GEPA Board of Directors for final review, approval, and amendment.

Speaking of doing a good job, on Nov. 15, two long-incumbent Guam EPA board directors expressed interest in being reappointed during a public hearing to review their qualifications. Both expressed gratitude for the conscientiousness of staff and management at the agency.

And if their wishes and those of their supporters are granted, their renewals will be as natural as the returning spring.

“I have been on the board for probably about 16 years…give or take a year or so, so we’ve been on it quite a while, but we just are supportive of our administrator and staff, and we look forward to the work that they do for us,” Guam EPA Board Member Florida M. Sanchez said.  “It’s quite a bit of work. It’s very involved…but I do appreciate being on the board and serving in that manner.”

Noting his conflict of interest, Sanchez’ brother, Simon, stood by his sister during public testimony at the appointment renewal hearing. “I still remember 20 years ago, Flori was the first one who got us into recycling, thinking green, talking to me about energy,” Simon Sanchez said.

“She is from Oregon, so she loves her environment; she’s committed to it. You see it in the hard work. She has served, like Bob [Perron], for 16 years. I have full faith and confidence in her to be able to provide guidance.”

“I’m proud to have been a member of the Guam EPA board for the past 16 years,”  Perron said. “In that time a number of important initiatives have been implemented , which have served to protect the environment and the people of Guam.

“The agency has issued a series of rules and regulations for pesticides entering our island and the certification requirements for individuals using these products. Rules and regulations for underground storage tanks have been promulgated, which have allowed our agency to take a bigger role in tracking and inspecting these tanks. Fee schedules have been approved, which allow these departments to generate funds to assist in running these programs.”

The administration also seems pleased with the veteran board members’ work.

“Under their guidance and supervision, this year is the first time in the last—I’d say six years that we’ve gotten off the high-risk listing from US EPA,” Guam EPA Administrator Walter Leon Guerrero said during public testimony.

“I know the people who have worked there for many, many years, and they’ve worked very hard. I always tell the director, ‘please, you’ve got some very competent people at Guam EPA. Let’s show off how competent they are. Get out there and keep talking about them— what they are doing, yeah, the progress that they’re making— the vision that they have and things like that.”

Acting Speaker Terlaje says the Legislature plans one session this month and a final session to close the 34th Legislature in December.