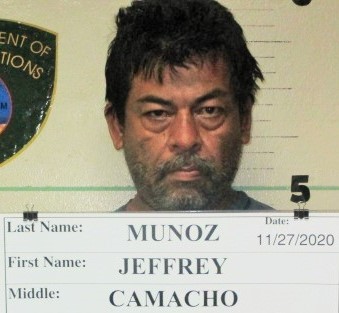 It wasn’t a Happy Thanksgiving for everyone as police responded to a residence in Chalan Pago where a domestic dispute got physical.

Jeffrey Camacho Munoz punched his son in the face as the two were arguing. The complaint states that the force of the punch caused the victim to fall.

Witnesses observed Munoz allegedly choking the victim with both hands, making it difficult for him to breathe. The altercation prompted another family member to intervene.

Munoz then instigated another argument with the victim by stating, “What, you think you’re tough?”

Police conducted an injury check, noting redness and swelling to the victim’s face. They also found what appeared to be blood on a pick-up truck. Munoz was charged with family violence and strangulation. He was booked and confined.