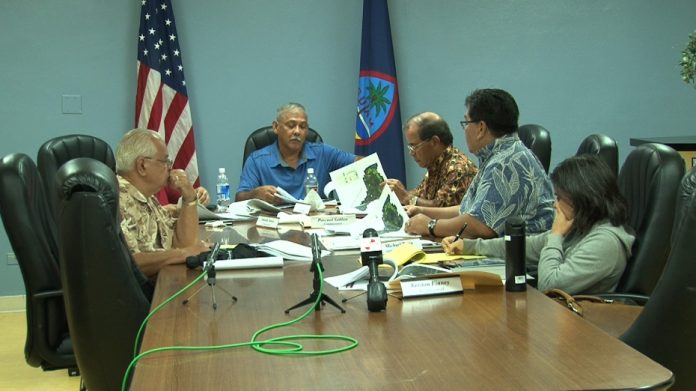 CLTC Administrator Mike Borja says they are not asking to include the Sagan Kotturan Chamoru or Chamoru Cultural Center at Oka point.

Guam – Now that they have their rules and regulations in place the Chamorro Land Trust Commission will begin issuing out commercial leases and this afternoon(Thurs.) they discussed which lots they would like to lease out.

Now that their rules and regulations have been passed by the legislature and signed into law by Governor Eddie Calvo the Chamorro Land Trust Commission will begin issuing out commercial leases.

During their board hearing this afternoon the CLTC Administrator Mike Borja listed the properties that they would like use for commercial leases. One of those places is the Oka point area of Tamuning. “Lot 5173 in Tamuning this is off the West end of San Vitores road also known as Oka point. It’s approximately 38 acres in size R2 is it’s zoning and it’s worth over $19 million dollars in tax accessed value. Potential use for any commercial or hotel activity conducive to it’s size and location and we recommend to authorize for commercial use for the purpose of engaging in a commercial lease,” said Borja.

There have been concerns that this lease will include the Chamorro Cultural Center that is currently being operated by a non-profit organization. One of the volunteers of that organization Ed Benevente spoke out against these plans at a recent public hearing. Benevente told lawmakers that he had received a copy of a Determination of Need document that showed the intent to include the Chamorro Cultural Center as a part of the lease of Oka point. CLTC Administrator Mike Borja also previously told PNC that they were looking at incorporating the cultural center into the private developers plans somehow. However, today Borja told commissioners that this is not a part of the Oka property that they are considering leasing. “The Chamoru cultural center they’re using that’s not considered in this request although that’s all a part of Chamoru land trust too,” said Borja.

The CLTC is now officially looking at leasing out the Lajuna point area of Yigo behind Smithbridge. “Open solicitations if we want to do this again this is the opportunity for us to do this to take a portion of this property and terrace it down for future development of affordable homes subdivisions and then the mineral extraction will be a source of revenue for the Chamorro Land Trust Commission.”

The CLTC has been considering leasing out the Lajuna point area to a private developer who will quarry the site and then convert it into an affordable homes subdivision. Now with their rules and regulations in place they can begin this process.

The CLTC is looking a leasing a number of other properties including an area across from GAIN in Yigo. They are considering leasing this to a private developer to build up to 130 affordable homes.