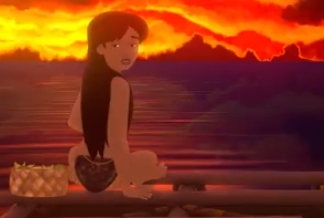 The Guam Department of Education and Twiddle Productions is excited to announce that “Maisa, The Chamoru Girl Who Saves Guahan” will premier next week.

Guam – It’s been over a year in the making and it’s finally here: the first animated Chamorro language film “Maisa, The Chamoru Girl Who Saves Guåhan.”
The film “Maisa” was produced by the Guam Department of Education’s Chamorro Studies and Special Projects Division and Twiddle Productions. “Maisa” re-tells the classic Chamorro tale of “The Maidens That Saved Guam” in a visually rich and exciting version…but why Maisa?
GDOE Chamorro Studies Former Director Ron Laguana says, “Maisa. I’ve always thought about that name. I have a list of names but that came into importance because it’s individual, it’s myself, there’s no gender. Guaiya na Maisa. The tone of it…it was just a very attractive name.”
Ron Laguana says it was more than just making a film, it was also very educational for the more than 100 GDOE students involved in the production. He explains, “It’s a product that we can be proud of, that brings up the Chamorro language to a high level of technology in a field of capturing children who want to know and understand their language and culture. It’s a product of the Department of Education and our students and teachers.”
The film was created as part of the HITA program or Hinanao-niha I Taotao Antes, meaning: our way of life long ago. HITA is a new project that blends the Chamorro culture, language, arts, animation and student participation. Students participated in both the voice over, creation of art work, and there were even some actors and actresses selected to played a role in the film.
Twiddle Productions Producer and Director Michael Ceballeos says, “The students that we auditioned thousands of kids to hire the main actors. We also created a program where we worked with art students where they created artwork for the opening artwork so it was really important having all those elements together and that gives it the power.”
GDOE Chamorro Studies Acting Director Ruth Mendiola says as a teacher, she hopes this animated film will be the first of many that will help spread awareness of the Chamorro language and culture. She says, “As a 30-year veteran teacher, I was always looking for resources like this. This is the first time ever so I’m very grateful that now Chamorro teachers have this resource. It’s not just reading from a legend book and telling a story from what we know in our past, now they can see the picture so I’m so grateful now that it’s done. We hope to continue more for the children of Guam.”
In fact, even for Director of Photography Live Action Valerie Gonzales, it was a learning experience. She explains, “For me as a Filipina, it was such a cool experience as well. Even though I don’t understand or speak Chamorro, I am able to understand and learn about cultural studies and Chamorro legends.”
GDOE is excited to announce that “Maisa” will premiere to the community next week.
The film will screen on December 7 for cast and crew members, and stakeholders then there will be screenings at schools throughout Guam on December 9 to 11. There will also be two free screenings open to the community on December 12 with English subtitles at the University of Guam Lecture Hall and December 13th in Chamorro without subtitles at the School of Business and Public Administration Leon Guerrero Building.
Showtimes
12th: 4-5 pm, 5:30-6:30 pm, 7-8 pm, 8:30-9:30 pm, 10-11pm
13th: 10-11 am, 11:30-12:30pm, 1-2 pm, 2:30-3:30 pm, 4-5 pm, 5:30-6:30 pm, 7-7:30 pm, 8:30-9:30 pm
For tickets, pre-register with Chamorro Studies at 300-5055 or 300-5048. Registration hours 9-11:30 am and 1-3:30 pm. Raffles will be held after every screening.