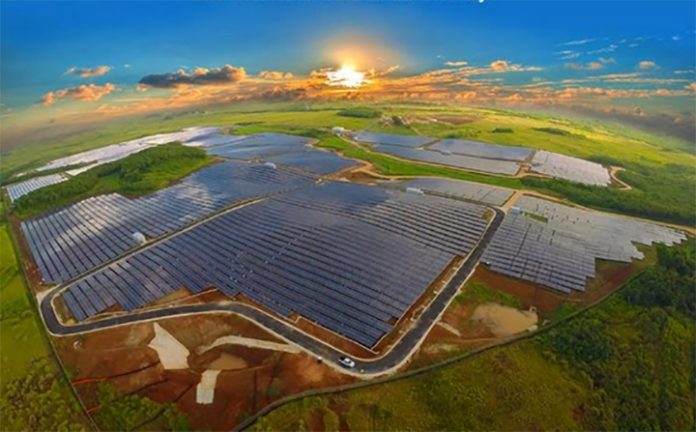 Gov. Eddie Calvo said that the Dan Dan Solar Farm ‘looks like a lake’ from above.

Guam – A record has been broken here on Guam, at least according to Hazen Burford Senior Vice President of NRG Renew, Burford is talking about the official opening of the first solar farm on Guam.

It’s the first if it’s kind on Guam. It signals a beginning for Guam’s leap forward into renewable energy. NRG renewable in partnership with GWA is the company running phase 1 of the Dan Dan solar farm. Consolidated Commission on Utilities Chairman Joey Duenas said at the ceremony that Guam plans to have 120 megawatts of renewable energy. The opening of the Dan Dan solar farm will contribute at least 25 megawatts to that goal. Hazon Burford, says that the Dan Dan solar farm will avoid the emissions of over 40,000 tons of carbon-based emissions that would normally be emitted with a standard power plant. Today was the ribbon cutting ceremony for the solar farm. Members of NRG management, CCU, GPA and Governor Eddie Calvo all sat in attendance.

“We had some major crisis that occurred in terms of our base load units that were put down as a result of an explosion and a fire. There was a tie when people thought we had too much spinning reserve. But this has come at a time when we need this energy, not as a reserve but we need it,” said Calvo.

General Manager John Benavente says that the solar farm can produce 150,000 kilowatts a day, which can power 6,000-10,000 homes. More than that, and as Gov. Calvo eluded to, the solar farm played a role in helping Guam with capacity during the day after the explosions at Cabras 3&4 knocked out 80 MW of capacity. We asked Hazen Burford about what the communication was like between GPA and NRG post the explosion.

“It increased the urgency to get this project online so working with GPA, we looked at how we could get online as quickly as possible and as expeditiously as possible and so that was the communication theme with GPA,” said Burford. We did accelerate some things to get some of the plant online and we continue to do that now.”

Another heavily touted feature of the solar farm is how local it is.

“During the construction we employed approximately 300 employees, local laborers and some local companies that contributed vastly to the overall success of the project,” said Burford.

The Dan Dan solar farm is a project that has been four years in the making. And while the project is being praised as a step forward in renewable energy, there is still the concern about how reliable solar energy is. When the sun doesn’t shine, the farm can’t produce energy. This becomes a problem particularly at night. GPA is currently in the process of procuring an energy storage system to help alleviate this issue. According to a PUC docket, the estimated cost of such energy storage systems is $35 million dollars.