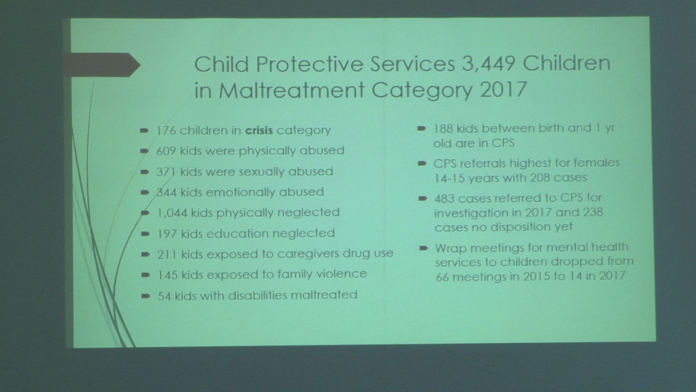 Guam – We hear about it in the news almost every day: reports of child abuse. And now we’re seeing the numbers back it up. Year after year, more children are at risk of abuse and death. And now, the number of children in the Child Protective Services system are in the thousands.

These alarming statistics were the highlight of discussion for Ayuda Foundation Executive Director Carlotta Leon Guerrero who spoke before members of the Rotary Club. The topic was on child mortality on Guam, but she also discussed the staggering number of Guam’s children who are being abused.

Numbers also show that the risk of death for children between the ages of birth to four years are high.

“Eighty-three deaths of children between just the day they are born and 28 days. So you can follow the number of deaths. Twenty-seven deaths for children one to four years of age,” highlighted Leon Guerrero.

A root cause analysis indicates that most of these children live in poverty.

“The percentage of women that are on Medicaid are–their children are dying at a higher rate, being born with congenital abnormalities. The women that have non-Medicaid insurance are doing better. So what it’s telling you is that poor women, young, poor women are having trouble accessing healthcare,” she noted.

But it’s not just poverty. Leon Guerrero points out that racism has a role in these disturbing numbers.

“Some of these root causes are persistent poverty and also this report highlights pervasive and subtle racism and that has to do with our other islanders coming in here and being the newest immigrants,” she said.

And if there may be any doubt about these numbers, all you have to do is compare our statistics with that of the U.S. mainland.

Compounding the problem is what appears to be a decline in mental health services.