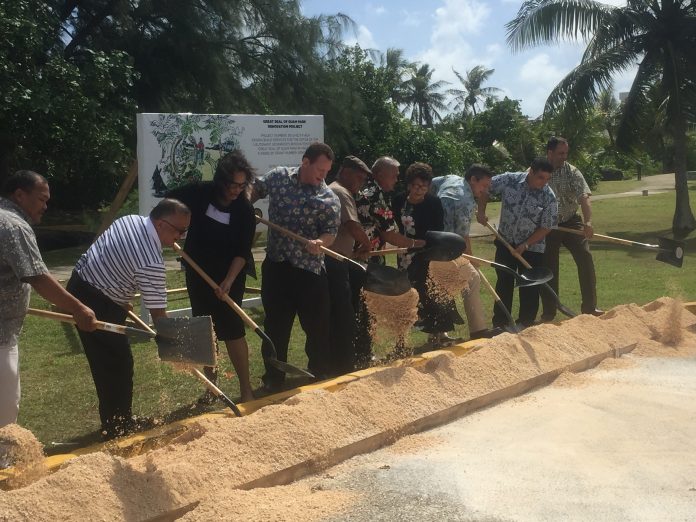 Governor Calvo, along with other Island leaders, breaks ground at the New great Seal of Guam Park.

Guam – The site for the Great Seal of Guam Park, as depicted in the Great Seal of Guam, opened today in the presence of the Governor, Lt. Governor and other island leaders. Guam was awarded the $264,300 grant in March to begin revamping the aging park, which is believed to be the most accurate real life location as depicted in the Great Guam Seal. The office of the LT. Governor and the Guam State Clearinghouse joined together back in February to apply for a technical assistance program grant. Francisco Feja, an early 20th century artist, created the Great Seal of Guam. The Feja family was in attendance to celebrate the occasion. Today at the ground blessing ceremony, Governor Eddie Baza Calvo talked about the importance of unveiling one of Guam’s most recognizable symbols.

“Here we are in 2015. I see an island with relative peace and prosperity. I see a people so confident in our future. But that is what this is all about. This memorial here, this great seal park, is a testament to our people, to our long history. Its important,” said Calvo.

Lt. Gov Ray Tenorio says that the unveiling of the Great Guam Seal will add to Guam’s overall appeal ahead of Festpac 2016, which is being held on Guam for the first time in Festpac history.