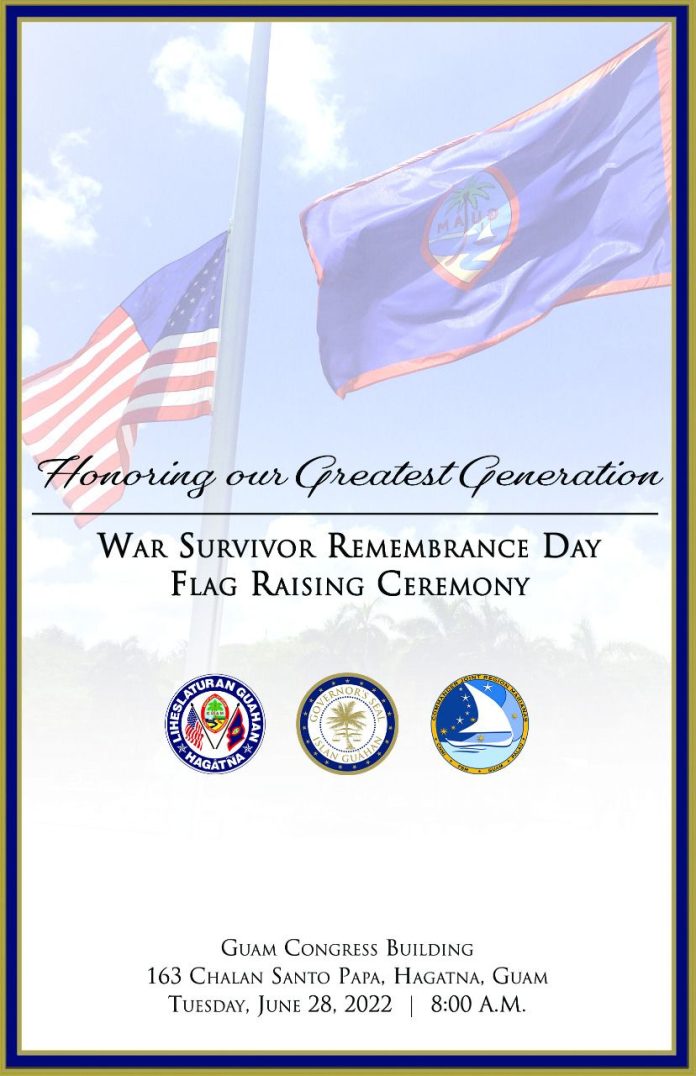 The War Survivor Remembrance Day Flag Raising Ceremony was held on today at 8 AM at the Guam Congress Building.

The War Survivor Remembrance Day is a day dedicated to honoring the people who suffered and survived Guam’s occupation during WWII. On June 26, 2015, Guam Public Law 33-56 was enacted declaring that June 28 is observed as War Survivors Remembrance Day. There were many speakers at the event including, but not limited to, Speaker Therese Terlaje, Rear Admiral Benjamin Nicholson, and Governor Lou Leon Guerrero.

Speaker Terlaje laments on the atrocities the CHamoru people endured and the bravery they’ve shown that made Guam what it is today.

THERESE TERLAJE, SPEAKER stated, “The review commission finds that the Japanese occupation of Guam was particularly cruel, oppressive, and brutal. And that the loyalty and steadfastness shown by the people of Guam in the face of the atrocities and barbarism inflicted on them by their Japanese occupiers was all the more extraordinary in the circumstances in which they were forced to live.”

Speaker Terlaje also talked about how the Japanese occupation affected the island.

THERESE TERLAJE, SPEAKER stated, “After the war, you led us in building Guam to the prosperity that we enjoy today for your children. And you did it all for your children and your grandchildren. And for future generations. And you’ve built a strong foundation that we are all benefitting from.”

Rear Admiral Nicholson from Joint Region Marianas praised the people who sacrificed to give Guam a better future.

REAR ADMIRAL BENJAMIN NICHOLSON, COMMANDER OF THE JOINT REGION MARIANAS stated, “We must remember the sacrifices that they made to endure because if they had not endured and not come through we would not have that society we have today on Guam.”

Governor Leon Guerrero talks about the principles and values that the people of Guam have gained during WWII.